Priyanka Chopra Shares Blast From Past With Dad Ashok: "Miss You Every Day" 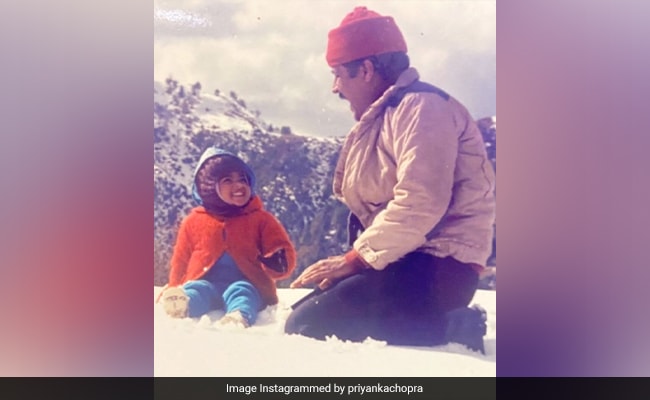 Priyanka Chopra, who shared a close bond with her father, Ashok Chopra, has dropped a major throwback picture on her Instagram wishing her late father on his birth anniversary. In the image, the actress can be seen having the time of her life playing with her father in Kashmir. The father-daughter duo look adorable covered from head to toe in winter outfits, while in the background, we can see snow-covered mountains. Sharing the post, she wrote, "Happy birthday dad. We miss u. Everyday.". Soon after she shared the post, her husband, Nick Jonas, dropped a heart emoticon in the comment section. Khushi Kapoor, Anshula Kapoor, Hina Khan and others also dropped heart emoticons.

Priyanka Chopra's father, Ashok Chopra, died of cancer in 2013. The actress was close to her father, and her tattoo "Daddy's lil girl..." stands as proof. Priyanka's father was a physician in the Indian Army.

Priyanka Chopra in an interview with Oprah Winfrey on her show, Super Soul,opened up about losing her father to cancer. She said, "I think around the death of my dad, I was very angry. My relationship with God changed a little bit. But then at the same time, I feel like God helped me find salvation and come out of it too. But at that time, it was tested."

She added, "I went to every temple there was to go to. I did every prayer there was to do. I met every godman or godwoman I needed to meet, every doctor I needed to go to. I flew my dad to Singapore, New York, Europe, India, everywhere, just to do whatever I could to prolong his life. It's such a helpless feeling."

Meanwhile, Priyanka Chopra is currently having the time of her life with her daughter Malti Marie Chopra Jonas. Often, the actress shares a sneak peek of her daily life with her daughter. A few days ago, she shared cute pictures of her daughter that show the mother-daughter duo relaxing by the pool. Sharing the post, the 40-year-old actress wrote, "Love like no other," followed by a heart emoticon. Soon after she shared the post, her industry friends flooded the comment section. Kareena Kapoor wrote, "PC and her baby...(heart emoticons) Biggestt hug." Priyanka Chopra's cousin Parineeti Chopra wrote, "I miss herrrrr," while Anushka Sharma and others dropped heart emoticons.

In terms of work, Priyanka Chopra was last seen in Matrix 4. Next, she will be seen in Citadel and It's All Coming Back to Me.