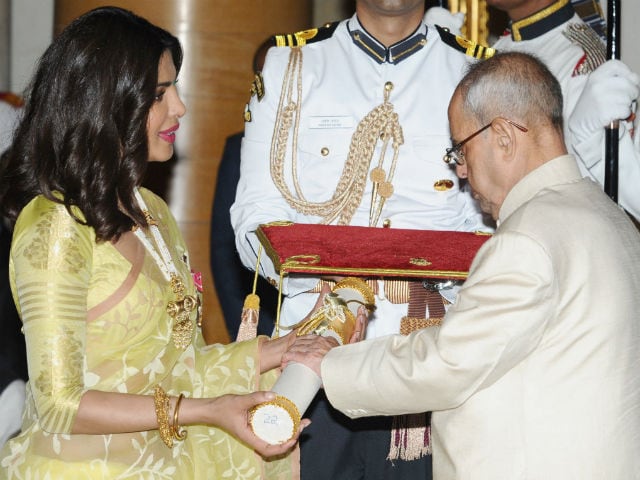 New Delhi: Foreign-returned Desi Girl Priyanka Chopra made a flying visit to New Delhi on Tuesday to receive her Padma Shri from President Pranab Mukherjee. On social media, the 33-year-old actress said it was a 'proud moment' for her.

Priyanka's team tweeted a photo of her after she was awarded. On her own Twitter account, Priyanka wrote: "Such a proud moment. To be back in my country.. My capital.. Rashtrapati Bhavan & receiving the PadmaShri #blessed."

Ladies and gentlemen... Presenting #PadmaShriPriyankaChopra! Super proud of all your achievements @priyankachoprapic.twitter.com/mU6kby4xhi

India sees very little of Priyanka Chopra now. The actress recently wrapped the second season of her American TV show Quantico and will head back to USA to shoot Baywatch, the film version of the superhit TV show that made stars of actors like David Hasselhoff and Pamela Anderson. Dwayne Johnson headlines the Baywatch movie, with Priyanka playing the antagonist. (Also Read: Padma Awards: Rajinikanth, Priyanka Receive Honours)