Priyanka Chopra On Zac Efron's Abs: Got Hungry Watching Him Work So Hard 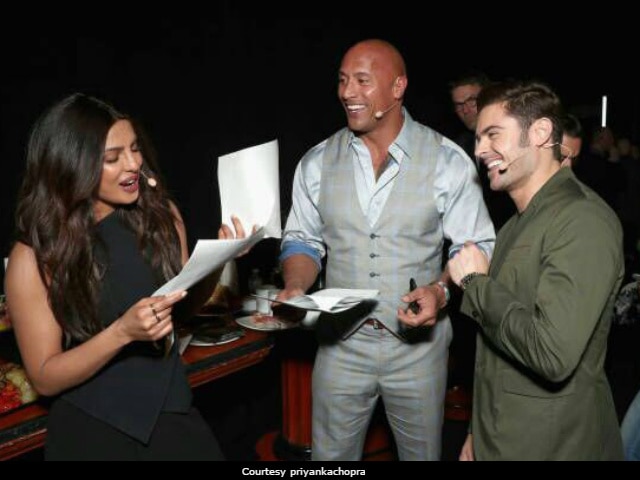 New Delhi: Actress Priyanka Chopra is all set for her Hollywood debut with beachside movie Baywatch, in which she co-stars with the likes of Dwayne 'The Rock' Johnson and Zac Efron. The 34-year-old actress said that during her initial days of filming Baywatch, she had doubts about Zac Efron's abs being real. Priyanka was talking about her Baywatch co-stars in an interview to E! News on the sidelines of CinemaCon. Priyanka and her team of Baywatch comprising Zac Efron, Alexandra Daddario, Kelly Rohrbach and Jon Bass, took over Las Vegas at the CinemaCon earlier this week. "I didn't think it was real initially. (I thought) there's got to be some air brushing or paint brushing or whatever people. I can vouch for them. I have seen them for real. They are real and I was shocked," Priyanka was quoted as saying.

When Priyanka was asked about Zac Efron's training regime she said: "Even in between shots, he's like training. He is forever training. I watched him and I ate. I was always eating whenever Zac was training. I don't know why I always got hungry seeing him work so hard."

The video of Priyanka talking about Zac Efron has been shared on social media.

Meanwhile, Priyanka also shared pictures of her fun-filled moments from the CinemaCon.

Promoted
Listen to the latest songs, only on JioSaavn.com
Baywatch casts Priyanka Chopra and Zac Efron in opposite teams - Zac is part of Team Lifeguard headlined by The Rock while Priyanka features as the prime antagonist Victoria Leeds in the film. Directed by Seth Gordon, Baywatch is the onscreen adaptation of the nineties' popular TV show, starring Pamela Anderson and David Hasselhoff, both of who will feature in cameos in the film.

Baywatch is scheduled to hit screens on May 26.