After massive outrage on social media, a glimpse of which are tweets calling Priyanka "stupid" and "pea-brained" for her choice of words, the actress' team got in touch with Sikkim Tourism minister Ugen Gyatso, who revealed that Priyanka has apologised 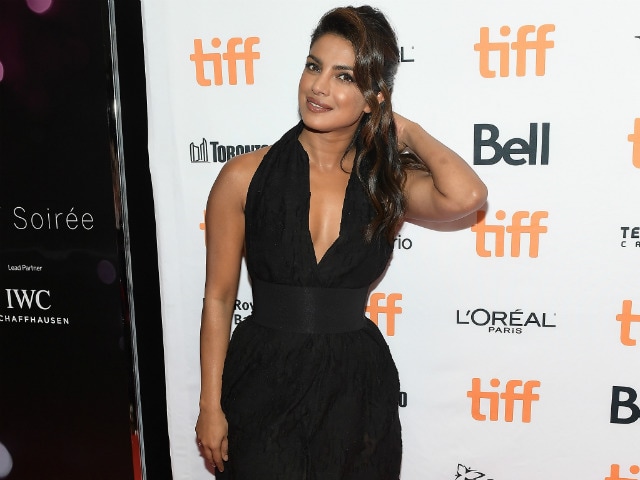 New Delhi: Priyanka Chopra has apologised after she was called out on social media for referring to Sikkim as a state "troubled with insurgency" in an interview to ET Canada, at the ongoing Toronto International Film Festival. After massive outrage on social media, a glimpse of which are tweets calling Priyanka "stupid" and "pea-brained" for her choice of words, the actress' team got in touch with Sikkim Tourism minister Ugen Gyatso. "I condemn Priyanka's statement. Being an international figure, it's a very disappointing comment on her behalf. It has definetly made us feel bad and sad but she has apologised us through a mail, likewise her mother Madhu Chopra also apologised over phone today in presence of Sikkim media persons." Priyanka referred to Sikkim as "troubled" when she was speaking in connection with her new Sikkimese production - Pahuna - which premiered at the prestigious film fest last week.

Mr Gyatso added that he's also received an apology from Paakhi A Tyrewala, the director of Pahuna: "Even Director Paakhi had apologised earlier. As everyone knows that Sikkim is a very peaceful State with peace loving citizens so we accept their apology and we assure to provide security and help from our behalf to everyone who wants to shoot their films in Sikkim in future."

Earlier, Twitter was furious and "Shame on you, Priyanka Chopra," the actress was told. Twitter is in no mood to pardon Priyanka and is also separately angered with the actress who tagged Pahuna as the first film from Sikkim. "Priyanka Chopra, you called Sikkim an insurgency affected state. Idiot. God doesn't give everything to everybody. Find better uses for your loud mouth," she was told. "Get your facts right before speaking out. Sikkim is one of the most beautiful states of our country," added another netizen on Twitter.

Others invoked Bollywood and movie stars in general for the lack of sound political knowledge. "Infact it is foolish to create controversy on Priyanka Chopra's statement over #Sikkim as celebs like her are 'politically illiterate'," read a tweet while: "If you have no idea about Sikkim, don't speak about it then. "Big star"," said another.

Priyanka was also slammed for appeared to have not been thorough with her research: "Priyanka Chopra says Sikkim is a troubled state in interview to US media. Pea-sized brain, zero homework. Is this how you make money?" a tweet said.

@priyankachopra U called Sikkim an insurgency affected state.Idiot-God doesn't give everything to everybody.Find better uses 4 ur loud mouth

Infact it is foolish to create controversy on @priyankachopra's statement over #Sikkim as Celebs like her are 'politically illiterate'. 1/2

@priyankachopra If you have no idea about Sikkim, don't speak about it then. "Big star"

#PriyankaChopra says #Sikkim is a troubled state in interview 2 US media. Pea-sized brain, zero homework. Is this how u make money?

And may I say that you were aided by the state to promote the film and there u went blabbering nonsense ! #sikkim#PriyankaChopra

#PriyankaChopra must apologise to people of Sikkim ! Get ur facts straight !

Sikkim is one of the most peaceful states, dear Priyanka. We don't have any insurgency here. Plz comment responsibly.@priyankachopra

A section of Twitter quickly resorted to Google to hand over a list of movies released from Sikkim - Kaatha And Myth and Letter By Samten Bhutia - are a few, highlighted Twitter.

So I just googled and I got this. Category:Films shot in Sikkim pic.twitter.com/6yh77NTBZY

@priyankachopra films from Sikkim by Sikkimese directors: Kaatha & Myth by Prashant Rasaily, Letter by Samten Bhutia to name a few.

Sikkim government claimed that Pahuna is it's 1st feature film. She just said what they told her. She meant insurgency at border with Nepal

"The first film to come out of Sikkim," is what the excerpt of Pahuna read on the official handle of the film fest on Twitter.

This is what Priyanka actually said in her interview to ET Canada: "This is a Sikkimese film. It is a small state in the North East of India, who never had a film industry or anyone who made films from there. And this is the first film ever that's come out of that region because it's very troubled with insurgency and troubling situations..." Priyanka's comments arrive amidst the Darjeeling shut down, which was initiated to demand a separate state. Apart from Darjeeling, other parts of North Bengal, which are close to Sikkim, are also witnesses of regional territorial issues.

Promoted
Listen to the latest songs, only on JioSaavn.com
Pahuna, directed by Paakhi A Tyrewala, was applauded with standing ovation at TIFF. Apart from the director and Priyanka, the premiere was also attended by the actress' mother Madhu Chopra, who is the co-owner of Purple Pebble Pictures.

Priyanka Chopra is currently looking forward to two more Hollywood movies - Isn't It Romantic? and A Kid Like Jake and will also reprise her role in the third season of Quantico. Priyanka Chopra will not sign up for a Bollywood project this year - as told by her mother last month.