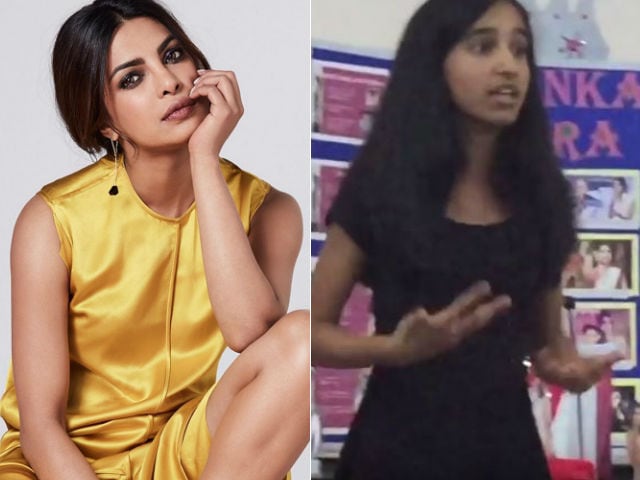 The image on left was posted on Instagram by Priyanka Chopra

New Delhi: A 12-year-old girl from Detroit just made Priyanka Chopra's day. The 34-year-old actress, currently busy with Quantico in USA, was the subject of a speech made by Priya Shah, a student at Orchard Lake Middle School.

Priyanka shared Priya's speech in a tweet and thanked her for picking the actress for her project:

In her speech, Priya described Priyanka's ascent from winning Miss World in 2000 to becoming the 'centre of success' in showbiz. Priya's speech incorporated dialogues from Priyanka's iconic films like Mary Kom, Gunday and Fashion, the last of which fetched her a National Award. Priya spoke about the challenges Priyanka overcame as well as her victories.

There was also a specific reason why Priya chose Priyanka Chopra as the subject of her speech.

Priyanka Chopra is currently filming the second season of American television show Quantico, in which she plays Alex Parrish, a CIA agent uncovering sinister plots conceived to shake up the US. Priyanka recently produced Ventilator, a Marathi film.

Promoted
Listen to the latest songs, only on JioSaavn.com
Priyanka is also all set for her Hollywood debut in Baywatch. She plays the antagonist opposite Dwayne 'The Rock' Johnson in the beachside film.

Priyanka hasn't announced her next Bollywood film. Her last Hindi film was Jai Gangaajal, directed by Prakash Jha and before that she was seen in Sanjay Leela Bhansali's Bajirao Mastani.