Priyanka Chopra said: "It's what I have chosen to do and every one of them is something I am passionate about" 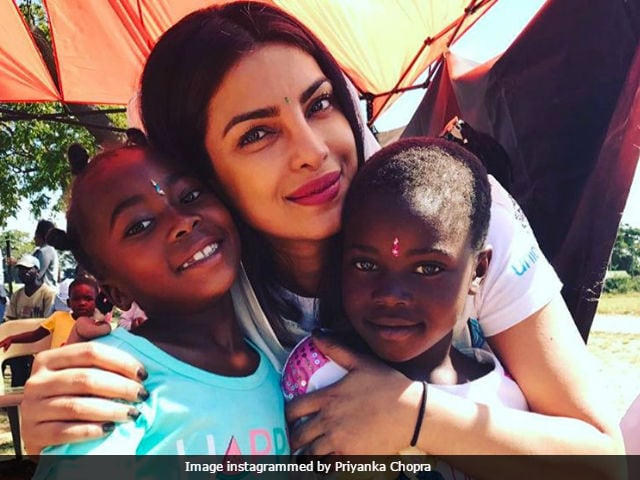 New Delhi: Actress Priyanka Chopra was recently in Zimbabwe to attend a charity gala organized by UNICEF South Africa chapter to raise awareness and funds for the rehabilitation of women and children who have survived domestic abuse and negligence in the past. Priyanka, 34, interacted with many women and children from the programme and shared their harrowing stories on social media. Talking about her role of the UNICEF Goodwill Ambassador and her social work in general, the Jai Gangaajal actress told news agency IANS: "It's what I have chosen to do and every one of them is something I am passionate about. Using my time and influence to do good is a human being's social responsibility and I take mine seriously."

Here's a glimpse of Priyanka's latest visit to Zimbabwe as UNICEF Goodwill Ambassador:

Big group hug!! Final goodbyes.. so hard letting them go. We had so much fun. #SafePark #UNICEF #EndViolence

After they taught me their dance moves I showed them one of mine.. it's called the "thumka" #DanceParty #EndViolence #UNICEF #thistimeforafrica #SafePark

Sindi(3) was very curious about my tattoo.. I told her we r all daddy's little girls... a lot of these girls are vulnerable to predators who are father figures. Its heartbreaking. But she was just precious. My tail all day. Following me around like lil bo peep.

Priyanka Chopra is as popular in the West as she is India, courtesy her frequent international red carpet appearances, television show Quantico and upcoming Hollywood film Baywatch. Priyanka has twice won People's choice award for her portray of Alex Parrish in Quantico. In Baywatch she features as the principle antagonist opposite Dwayne 'The Rock' Johnson and his lifeguard gang comprising Zac Efron and Kelly Rohrbach.

Talking about films in India, the actress told IANS: "I'm amazed by the variety of stories that filmmakers are conceptualising today. The audiences are changing and so is the storytelling. It's quite an experience reading the scripts or hearing a narration."

Promoted
Listen to the latest songs, only on JioSaavn.com
Priyanka Chopra hasn't announced her next Bollywood project yet.