Priyanka Chopra Gets A Surprise Gift From Joe Jonas. What's Inside? 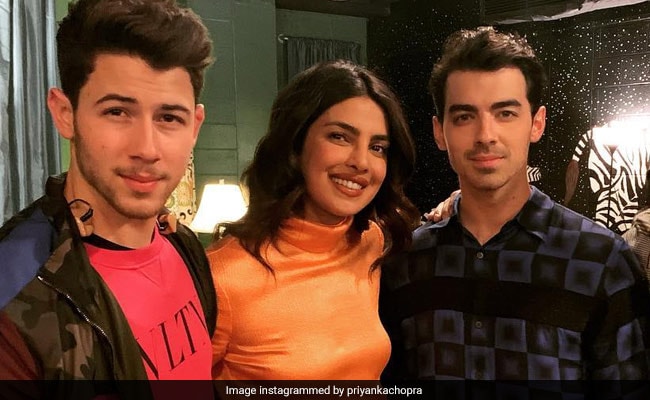 Who doesn't like gifts? Priyanka Chopra surely does. The 38-year-old actress was recently surprised by a fabulous gift package from one of the Jonas brothers. And no, it's not her husband Nick Jonas. Nick's brother Joe sent across a hamper from luxury footwear brand Koio. Joe Jonas has partnered with the footwear brand and it appears he must have sent Priyanka Chopra a pair from the latest collection. How sweet. Priyanka Chopra, who often hangs out with the Jonas brothers, thanked her brother-in-law in an Instagram story. Tagging Joe, Priyanka wrote: "Thank you Joe Jonas for the awesome Koio goodies." The goodies Priyanka refers to in her Instagram story arrived in a personalized bag with "PCJ" written on it. Here's what Priyanka Chopra posted on her Instagram:

Priyanka Chopra recently caught up with Nick's brothers Joe and Kevin Jonas at the Billboard Music Awards, where Nick was the host and Priyanka was a presenter. The Jonas Brothers also performed at the show.

Nick Jonas recently trended a great deal for revealing in an interview that he chose Kevin over Joe for sharing the news of his accident with Priyanka. Nick suffered a bike accident last month on the sets of a show. "It was a choice between Joe and Kevin. Who do you give your phone to call your wife in a time of crisis? And I gave it to Kevin," Nick was quoted as saying.

In terms of work, Priyanka's line-up of films includes Text For You and the fourth Matrix movie. Nick Jonas currently appears as a coach on reality TV show The Voice.