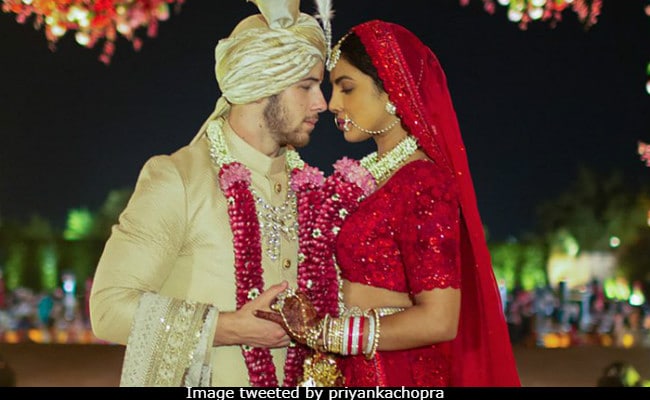 Priyanka Chopra and Nick Jonas released breathtaking photos from their wedding ceremonies in Jodhpur and the actress' colleagues just can't stop admiring how gorgeous they looked at their wedding. Soon after the pictures arrived on Priyanka's social media accounts, messages and best wishes congratulating Priyanka and Nick poured in from the likes of Deepika Padukone, who just got married to Ranveer Singh, Sonam Kapoor, whose big fat Punjabi wedding was in May, and Anushka Sharma, who married Virat Kohli in December last year. Deepika, who famously co-starred with Priyanka in Bajirao Mastani, left a comment on one of Priyanka's wedding pictures and said: "Congratulations" with a heart emoticon. Priyanka was also one of the first celebs to comment on Deepika's wedding pictures. "Insanely beautiful," she had written.

Meanwhile, on the wedding video shared by Priyanka, Anushka wrote: "You guys looked beautiful together. Wish you guys a blissful and blessed forever and ever." Priyanka and Anushka are co-stars of Dil Dhadakne Do, which also featured Ranveer. In December last year, Priyanka was also part of Anushka Sharma and Virat Kohli's glitzy Mumbai reception. She attended the reception party with her mother Madhu Chopra and brother Siddharth.

"You guys look insanely stunning. Congratulations, darlings," Sonam commented on Priyanka's Instagram and then also went on to tweet: "Oh god Priyanka what a fairy tale and you look breathtaking." Sonam Kapoor and Anand Ahuja hung out with Priyanka Chopra and Nick Jonas in Italy in September. They were in Lake Como to attend the engagement of Mukesh Ambani's daughter Isha.

Oh god Priyanka what a fairytale and you look breathtaking congratulations to both of you https://t.co/Ib9IYF4USO

Once upon a fairytale... @nickjonas@peoplehttps://t.co/tZH0Yk4Hwcpic.twitter.com/dMAxIvlsXb

Best wishes for the newlyweds have also poured in from Hollywood celebrities such as Dwayne Johnson (The Rock), with who Priyanka made her Hollywood debut in Baywatch. "Congrats, fam! So happy for you two," read his message. Nick Jonas' Kingdom co-star Jonathan Tucker, who was also reportedly part of Priyanka and Nick's wedding festivities, sent out a message in Hindi: "Bahut saara ashirwad," he wrote. Delightful messages were also posted by actress Elizabeth Chambers and Paris Hilton on the wedding photos. From Bollywood quarters, early congratulatory messages arrived from Alia Bhatt, Neha Dhupia, Esha Gupta, Dia Mirza, Daisy Shah and others.