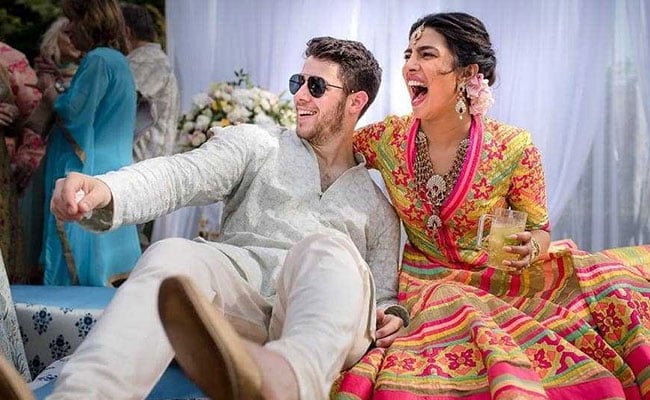 Nick Jonas and Priyanka Chopra at their mehendi ceremony

A day after Priyanka Chopra and Nick Jonas exchanged wedding vows in a Christian ceremony in Udaipur's Umaid Bhawan Palace, the couple had a traditional Hindu wedding on Sunday night. According to E!, Priyanka Chopra opted for a traditional red outfit for her special day. A source told E!, "Priyanka looked breathtaking in her traditional red Indian wedding outfit." The source added, "Nick did a beautiful job following the customs of a Hindu ceremony. It was lovely seeing how they honoured both of their heritages," Priyanka and Nick, who maintained a strict no-photos policy at their Jodhpur wedding, have not released any wedding pictures yet. However, the couple did give us a sneak peek of their sangeet and mehendi ceremony by sharing pictures on their respective Instagram accounts.

Priyanka and Nick's wedding guests left for Mumbai on Monday afternoon. Parineeti Chopra and her parents along with Nick's brother Kevin Jonas and wife Danielle were photographed at the Jodhpur airport. 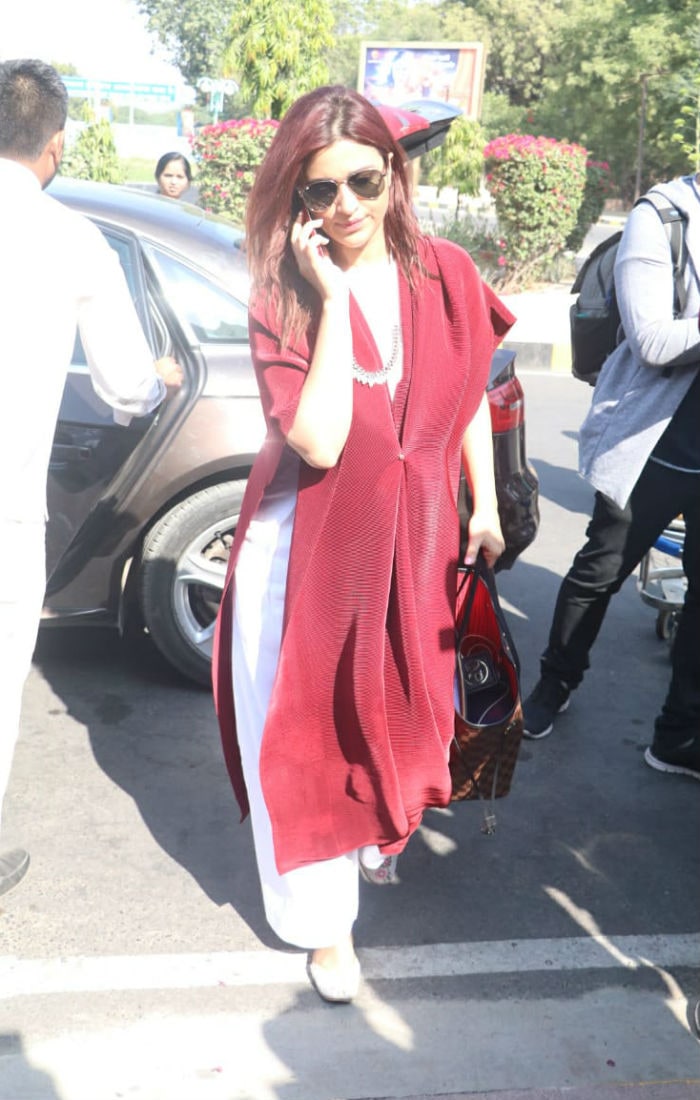 Parineeti Chopra at the Jodhpur airport. 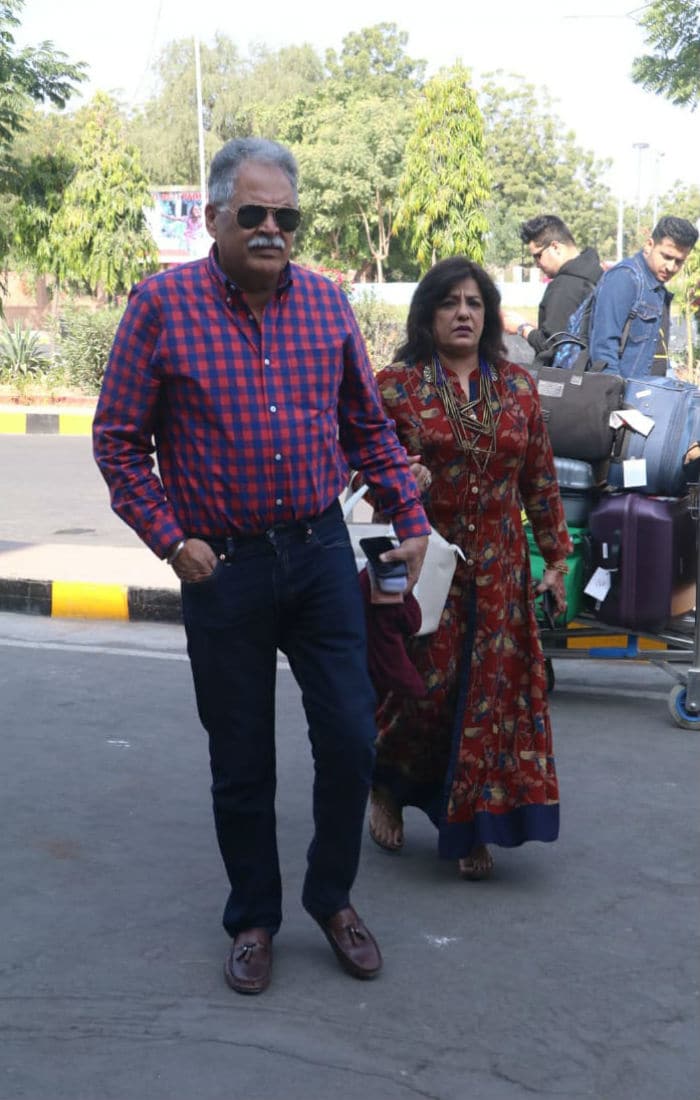 Parineeti Chopra's parents at the airport. 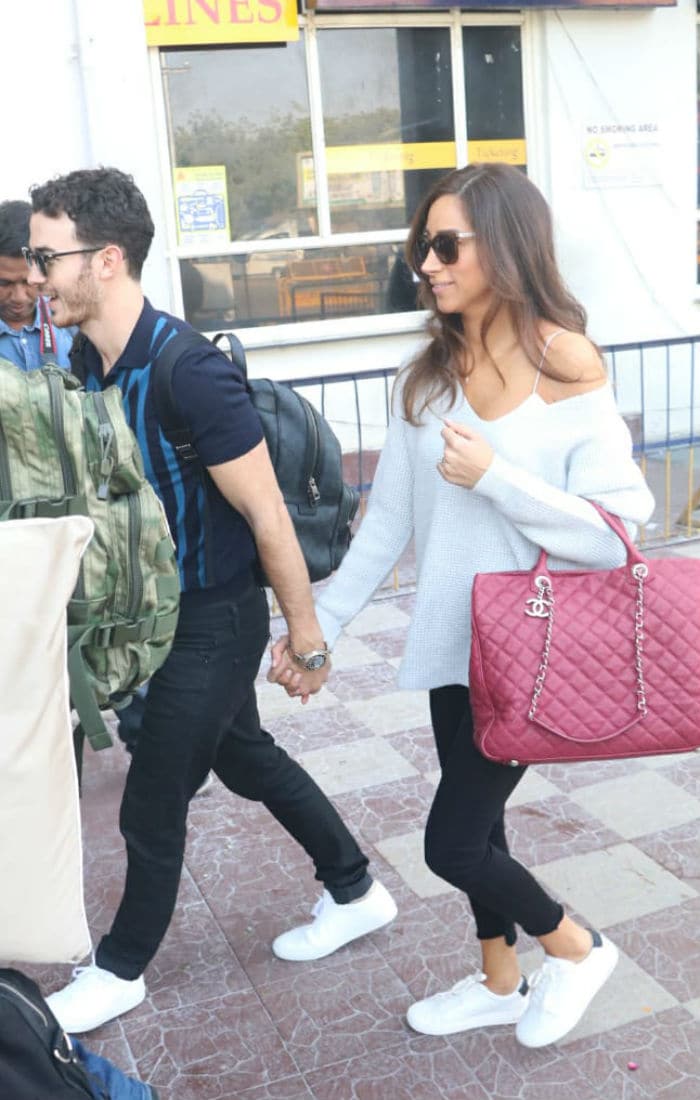 Kevin Jonas with wife Danielle at the Jodhpur airport.

It all began as a fierce song & dance competition between the families but ended, as always, as a huge celebration of love. Nick and I were looking forward to the Sangeet (musical evening), another pre wedding ritual.. and to see what each side had put together. And what a performance it was. Each family telling our stories through song and dance, filled with lots of laughter and love. We were both filled with gratitude for the effort, the love and the laughter and will carry the memories of this special evening for the rest of our lives. It is an amazing start to a lifetime of togetherness for our families and friends...#grateful @nickjonas : @calebjordanlee @josevilla @josephradhik

Priyanka also shared pictures from the mehendi ceremony, for which, both Nick and Priyanka opted for outfits designed by Abu Jani-Sandeep Khosla. She also treated her Instafam to pictures from a cricket match between "Team Bride Vs Team Groom." In the pictures, Priyanka could be seen happily posing with Nick Jonas, Joe Jonas, Kevin Jonas and her brother Siddharth Chopra.

The details about Priyanka and Nick's official wedding couturier for the Hindu wedding might not be known to us as of now but for the Christian wedding, the bride wore a customised Ralph Lauren gown and Nick too, wore an outfit from the same label. "Congratulations to Priyanka Chopra and Nick Jonas on the occasion of their wedding. Ralph Lauren is honored to have dressed the couple as well as the members of their wedding party," tweeted Ralph Lauren.

Congratulations to @PriyankaChopra and @NickJonas on the occasion of their wedding. Ralph Lauren is honored to have dressed the couple as well as the members of their wedding party.

Priyanka Chopra and Nick Jonas touched down in Jodhpur with their families on Thursday. Besides their family members, Salman Khan's sister Arpita Khan Sharma, Nita and Mukesh Ambani, their daughter Isha and son Anant. Radhika Merchant, who is reportedly dating Anant, also attended the wedding.

Nick Jonas and Priyanka Chopra got engaged in a traditional roka ceremony in Mumbai in August this year. The couple had first met during the Met Gala in 2017.