Priyanka Chopra's smile says it all in the picture 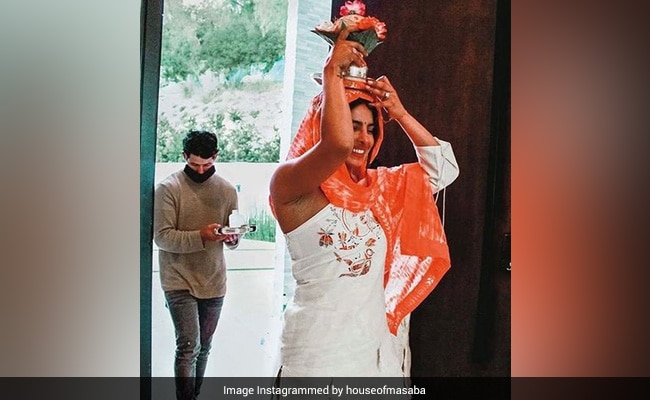 We just chanced upon a picture perfect moment from Priyanka Chopra and Nick Jonas' housewarming ceremony. The picture was shared by designer Masaba Gupta's House of Masaba, who styled Priyanka Chopra's look. In the picture, Priyanka Chopra can be seen smiling with all heart. For the special day, the Quantico actress picked a pristine white outfit from the shelves of Masaba Gupta, which she paired with a bright orange dupatta. Sharing the picture, the caption on the official page of House of Masaba read, "Priyanka Chopra Jonas giving us all happy vibes in our Ivory One Shoulder Tunic With Ivory Of Bird and Bees Pants for her housewarming ceremony."

The actress is busy with virtual tours and promotions of her memoir Unfinished. Posing a video with a set of pictures with her memoir, the actress wrote in her Instagram entry: "And now it's yours! Thank you for the encouragement." Unfinished has been published by Penguin Random House.

Priyanka Chopra was last seen in Netflix's The White Tiger, co-starring Adarsh Gourav and Rajkummar Rao. The film is based on Aravind Adiga's Booker Prize winning novel of the same name. The actress' upcoming projects include a comedy film with Mindy Kaling, Amazon's Citadel and Sangeet Project. The actress recently announced a Hollywood film with Sam Heughan and Celine Dion. She recently launched a haircare brand called Anomaly Haircare.

Priyanka Chopra, a former Miss World and a Bollywood star, is a woman of many hats. She is the first South Asian woman to headline the cast of an American television show and has featured in many Hollywood projects. Priyanka Chopra is a tech-investor and also counts as a UNICEF Goodwill Ambassador.