"Thank you, babe. You are the best," Priyanka Chopra responded to Nick Jonas My beautiful wife @priyankachopra just added PUBLISHED AUTHOR to her already long list of achievements! Unfinished is out now! Congratulations Pri! You are all going to love this book. 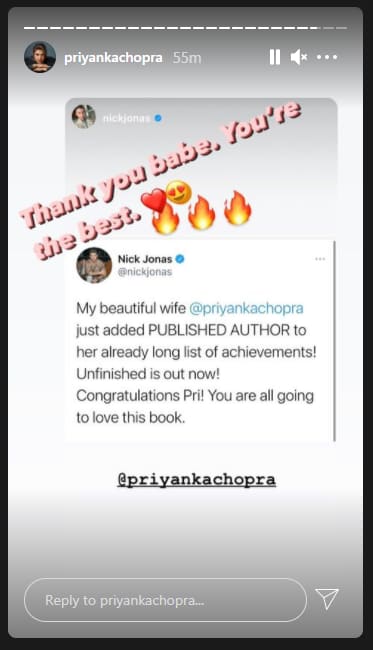 Priyanka Chopra indeed has a "long list of achievements", like Nick Jonas said. Her writing debut aside, she is a tech-investor and also counts as a UNICEF Goodwill Ambassador. She recently started a hair care brand called Anomaly Haircare. Priyanka Chopra also runs the production house Purple Pebble Pictures, which aims to promote regional cinema. Priyanka also had a career as a singer, debuting with 2013 track In My City, also featuring American rapper will.i.am.

In terms of work, Priyanka Chopra is one of the busiest stars - she features in the recently released Netflix film The White Tiger. Priyanka also had a new Hollywood release in We Can Be Heroes. Priyanka Chopra is currently in London where she travelled for the shooting schedule of her new movie Text For You but her stay got extended because of UK's third lockdown.