"Here's to auspicious beginnings. Stepping into the world of Prithviraj. Need your love and best wishes as always," Akshay Kumar tweeted 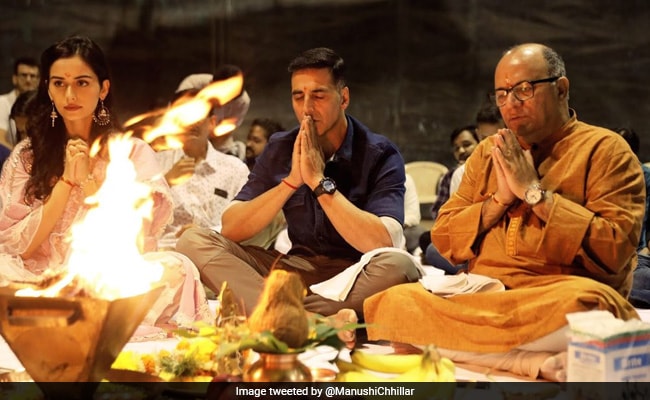 Manushi Chillar and Akshay Kumar during a puja (courtesy ManushiChhillar)

Miss World 2017 Manushi Chillar, like several beauty queens before, is finally making her Bollywood debut with Akshay Kumar's upcoming film Prithviraj. After reports of Manushi's speculated debut trended for days, the 22-year-old beauty pageant winner confirmed the news in a tweet, writing: "Feeling blessed." Akshay welcomed his new heroine like this: "Here's to auspicious beginnings. Stepping into the world of Prithviraj. In theatres Diwali 2020! Need your love and best wishes as always." Akshay and Manushi, who performed a puja at the Yash Raj Studios on Friday morning to seek blessings for their new venture Prithviraj, also tweeted photos from the ceremony.

Prithviraj, which is a biopic of Prithviraj Chauhan (as the name suggests), will be directed by Dr. Chandraprakash Dwivedi, who was also part of the puja. While Akshay Kumar will feature in the titular role, Manushi has been roped in to play Sanyogita, Prithiviraj's love interest.

Here's to auspicious beginnings Stepping into the world of #Prithviraj. In theatres #Diwali2020!
Need your love and best wishes as always. @ManushiChhillar#DrChandraprakashDwivedi@yrfpic.twitter.com/w3KQh4NhPe

Explaining the makers' decision to zero in on Manushi, Prithviraj director Dr. Chandraprakash Dwivedi said in a statement: "We auditioned a lot of young, fresh faces for the role because we were looking for a stunningly gorgeous Indian heroine. While Sanyogita was an incredibly beautiful person, she was also a strong, confident girl. We were looking to find someone who could match the magnetic persona of Sanyogita and we found that in Manushi." Dr. Dwivedi added that Manushi has already begun her prep for Bollywood: "She auditioned for the role a couple of times because we wanted to be dead sure with this casting and she nailed it each time. She has been rehearsing six days a week since then and she is being thoroughly groomed for the last 9 months by YRF."

Meanwhile, making a debut with a Yash Raj Films' production is "a huge honour" for Manushi, who said in a statement: "It is a huge honour to have been chosen by a production house like Yash Raj Films as their heroine! I'm thoroughly happy and thrilled about the learnings that I will have through this journey. My life, so far, has really been a fairy tale. From becoming Miss India and then Miss World to now getting such a big project as my debut film, it's like a new, exciting chapter of my life. It is a huge responsibility to play princess Sanyogita. She was a powerful personality and she stood up for what is right and took the most important decisions of her life by herself. Her life is an extremely important chapter in Indian history and I will try my best to play her as accurately as possible."

Manushi Chillar was crowned Miss World in China's Sanya city in November 2017 and founded the non-profit organization Project Shakti soon after, which works towards improving menstrual hygiene of women in rural India. Manushi Chillar is also a trained Kuchipudi dancer.