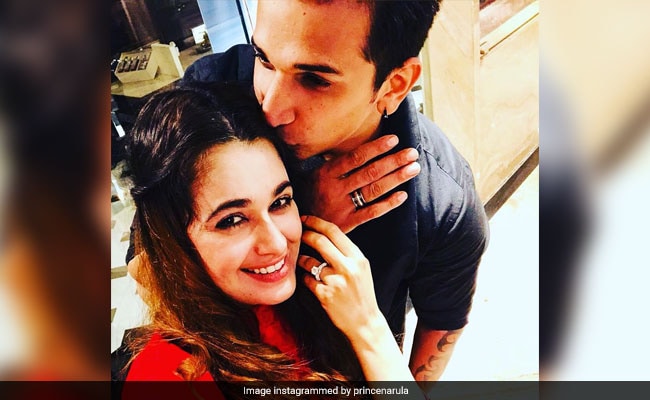 New Delhi: Yay! Prince Narula and Yuvika Chaudhary are finally engaged. The 27-year-old actor shared a photo on Instagram, which he captioned: Thank you baby thank you so much still can't sink in me that you said yes to me and you're mine forever now lovers for life #engaged and yes one one thing mehndi laga k rakhna doli saja k rakhna lene tujhe a gori aye ga Tera prince #love #life #hugs #thank you god #waheguru #blessed." In the picture, Yuvika is all smiles while Prince can be seen kissing her. The couple also show their engagement rings in the photo. Yuvika Chaudhary and Prince Narula met on TV reality show Bigg Boss 9, hosted by Salman Khan. The couple recently made a guest appearance on MTV's popular show Splitsvilla.

Recently, a video of Prince and Yuvika's engagement rumours also went viral on the Internet.

Few weeks ago, Prince also shared a picture with Yuvika and thanked his fans for all the love. He captioned it: "Thank you everyone for all your love hum dono k liye."

Of his relationship starting on a reality show, Prince told Times Now: "I had done few reality shows before I met Yuvika and have heard people say that couples on reality shows do not work. But if your love is true then your relationship will work and you can spend the rest of your life with her."

Promoted
Listen to the latest songs, only on JioSaavn.com
Princle Narula won three reality shows in 2015 Roadies 12, Splitsvilla 8 and Bigg Boss 9. He met Yuvika Chaudhary on Bigg Boss 9. Although Yuvika, who has featured in films like Om Shanti Om, Naughty @ 40 and Enemmy, was evicted from the show after 28 days, Prince Narula won the reality show.