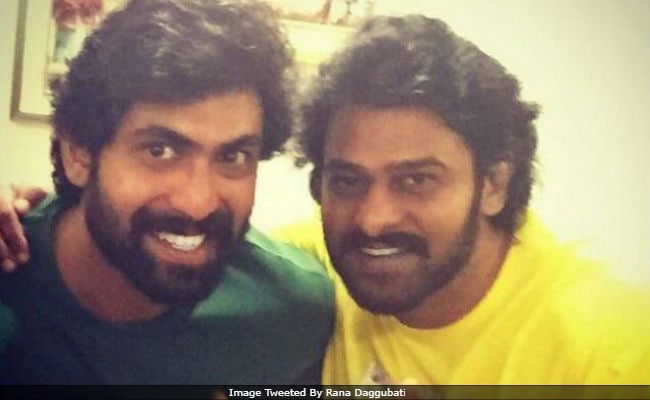 New Delhi: Much to the surprise of Prabhas' fans, his onscreen brother Bhallaldeva (in Baahubali) aka Rana Daggubati shared a picture of them on Twitter. The duo recreated a fan's version of Bhalla and Mahendra in the modern era, where they can be seen posing for a selfie together. Prabhas and Rana played brothers in Baahubali. Remembering the good old times from Baahubali days, Rana Daggubati wrote, "Oddly similar image isn't it?? Apart from moving the phone from Suriya Sivakumar to Bhalla and minus Venkat Prabhu....man those were really awesome days!! Baahubali #Prabhas." Rana posted a series of pictures featuring Prabhas in the post. Prabhas is currently shooting for his forthcoming film Saaho.

Take a look at Rana Daggubati's pictures with Prabhas:

Oddly similar img isn't it?? Apart from moving the phone from @Suriya_offl to Bhalla and minus #venkatPrabhu....man those were really awesome days!! #baahubali#Prabhaspic.twitter.com/yyfU0ipEyu

Rana had earlier shared a couple of posts featuring Prabhas, from the time when they were shooting Baahubali. "What fun we had in between all the madness...every day of filming this epic was memorable!! Miss being in the great kingdom of Mahishmati!!," he captioned one of the posts.

What fun we had in between all the madness..every day of filming this epic was memorable!! Miss being in the great kingdom of Mahishmati!! pic.twitter.com/xStwLsxsXi

Prabhas, who prefers to keep a low public profile, was last seen in Baahubali: The Conclusion, which released last April. He dedicated five years for his role in S S Rajamouli-directed Baahubali series. In the film, Prabhas played the dual character of father and son.

Speaking of the time that he devoted to Rajamouli's dream project, Prabhas told PTI in an interview that he will no longer consider any project that would require him to block this much of his time. "Actors have limited time. We also have a shelf life. I think I can't give five years to one project now. Even if I ever give that much time, I will simultaneously keep doing other projects because age is also a factor. It will not be good for my career," PTI quoted him as saying.

Promoted
Listen to the latest songs, only on JioSaavn.com
Rana Daggubati was last seen in a cameo appearance in Welcome to New York, which was released on February 23.