Pongal 2020: Rajinikanth and his family picked traditional outfits for the festival 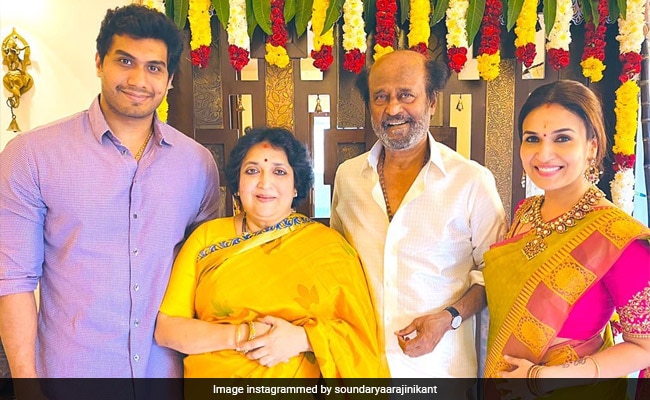 Rajinkanth's daughter Soundarya gave us a sneak peek into the family's Pongal festivities by posting a special post on Instagram. The 35-year-old celebrated the harvest festival with her parents Rajinikanth and Latha, and her husband Vishagan Vanangamudi. In the pictures, Soundarya and her mother Latha can be seen dressed in yellow sarees while Rajinikanth can be seen dressed in a white mundu and a matching shirt. The caption on her post read, "Happy Pongal." She accompanied the post with the hashtags #blessed and #grateful.

A post shared by Soundarya Rajinikanth (@soundaryaarajinikant) on Jan 15, 2020 at 1:18am PST

Soundarya Rajinikanth also posted a picture along with her in-laws and her husband and she captioned the post: "Wishing you all a very happy Pongal. With my adorable husband and absolutely amazing in-laws Vanaga appa and Usha amma . Pic with Thalaivar soon."

A post shared by Soundarya Rajinikanth (@soundaryaarajinikant) on Jan 14, 2020 at 8:35pm PST

On the release day of Darbar, Soundarya watched the first day first show of Darbar. Sharing a photo from the theatre, she added: "And that's how my day began! Superstar! FDFS!"

And that's how my day began SUPERSTAR!!!!! #DarbarFDFS

A post shared by Soundarya Rajinikanth (@soundaryaarajinikant) on Jan 8, 2020 at 6:33pm PST

Soundarya Rajinikanth married Vishagan Vanangamudi in February 2019. She was previously married to businessman R Ashwin, with whom she has 4-year-old son Ved. Soundarya, who has worked as a graphic designer in the South film industry since 1999, has also directed films such as Kochadaiiyaan and Velaiilla Pattadhari 2.

On the work front, Rajinikanth was last seen in Darbar, in which he plays a cop. The film opened in theatres last week and it released in Tamil, Telugu and Hindi.