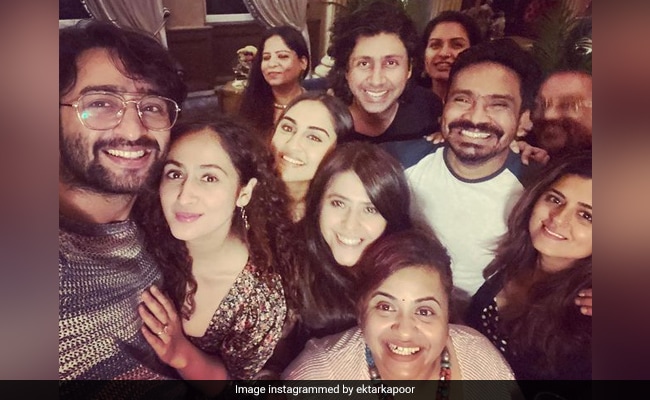 Ekta Kapoor's get-togethers with her friends have always been starry affairs. The producer, on Saturday, posted a couple of pictures of herself chilling with her television industry friends such as newlyweds Shaheer Sheikh-Ruchikaa Kapoor, Krystle D'Souza and Ridhi Dogra, among others. These actors are very close to Ekta Kapoor and she is often spotted hanging out with them. In her latest post, we can also see TV actor Akshay Dogra (brother of Ridhi Dogra), and screenwriter Mushtaq Shiekh posing with the rest of the group. Krystle D'Souza looks beautiful in a blue outfit while Ruchikaa Kapoor can be seen wearing a floral dress.

Ekta Kapoor often shares heart-warming posts for her friends from television industry. Recently, on actress Sakshi Tanwar's birthday, the producer, who has worked with the actress on the popular TV series Kahaani Ghar Ghar Kii, posted a throwback picture of themselves and wrote: "Happie birthday soxieee! This pic taken on August 16, 2019 is landmark picture of our friendship! You are and will always be (like Smriti Irani) someone I love and admire for your personal ethics as much as your professional one."