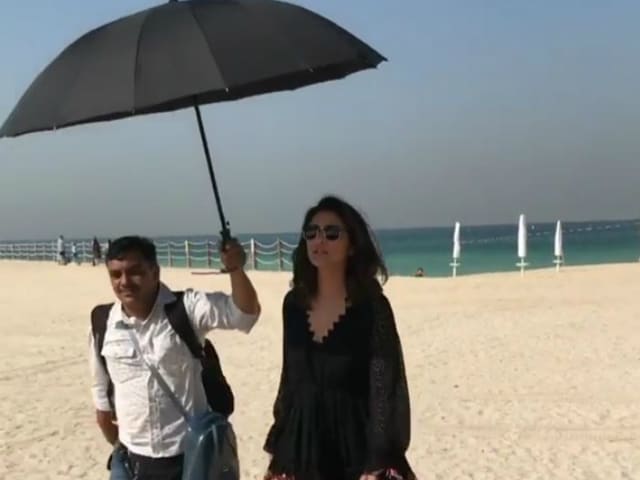 New Delhi: An Instagram post from actress Parineeti Chopra is making folks angry, with the comments thread accusing the 28-year-old star of being entitled. Parineeti is in Dubai on work and on Tuesday afternoon, she Instagrammed a video of herself walking across a local beach in a cute black dress. So far, so good. It's the gentleman walking with her, holding an umbrella over her head and laden with three bags who has prompted over 500 comments, most of them demanding to know why Parineeti can't hold her own umbrella. "The umbrella must have been a 100 kilos," reads one sarcastic response. "Holding your own umbrella wouldn't make you any less of a star," read another comment. Others pointed out that the actress' assistant was also carrying her bag. One comment wondered if Parineeti's much-discussed weight loss and fitness regime was aimed only at generating headlines.

This is what Parineeti posted, clearly without giving it much thought:

A day ago, Parineeti Chopra posted about flying out to Dubai, tagging her Shuddh Desi Romance co-star Sushant Singh Rajput, who was in Dubai last week:

Dubai-bound! Loved your adventure @Sushantsinghrajput , but mine is going to be epic!! Watch this space!

Promoted
Listen to the latest songs, only on JioSaavn.com
This isn't the first time Parineeti has been accused of being insensitive. Last year in August, a birthday message she posted for a friend was criticized because she told her friend to "eat less and become thin" - a comment that was seen as 'fat-shaming.' The actress was also accused of being hypocritical because she has spoken out publicly about being body-shamed, first for allegedly not being thin enough and then for allegedly being too thin.

Parineeti Chopra debuted in 2011 film Ladies Vs Ricky Bahl in a supporting role and then starred in 2012's Ishaqzaade. After three releases in 2014 - Hasee Toh Phasee, Daawat-E-Ishq and Kill Dil - she took a year off to work on her fitness and showed off a brand new look at the end of 2015. Last year, she appeared in a song sequence in the film Dishoom. Parineeti is currently filming Meri Pyaari Bindu with Ayushmann Khurrana, scheduled for this May.