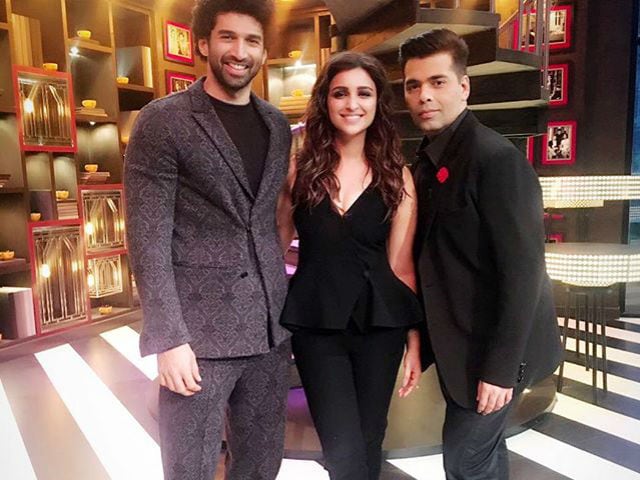 New Delhi: Actors Parineeti Chopra and Aditya Roy Kapur will share the couch at Koffee With Karan Season 5 and it would be a crackling episode if these pictures are anything to go by.

The actress Instagrammed pictures from the sets of the chat show, which will hit your TV screens today. We must say the former co-stars look amazing off screen too.

Koffee has been had!! It was no filter and extra strong !! The show should be renamed #GossipWithKaran but all is fair in love and rapid fires :) @karanjohar #AdityaRoyKapur

Parineeti, who stunned us all with her dramatic weight loss, looked stunning in an all-black look by designer Gaurav Gupta.

Parineeti and Aditya who shared screen in Daawat-e-Ishq in 2014 have continued to be friends. They were also part of the Dream Team concert which happened in the US and Canada earlier this year.

But before these too sip Koffee With Karan , it will be superstar Shah Rukh Khan and his Dear Zindagi co-star Alia Bhatt who will get candid with the chat show host Karan Johar.

Promoted
Listen to the latest songs, only on JioSaavn.com
Here are a couple of teasers for you from the episode. We can't wait.