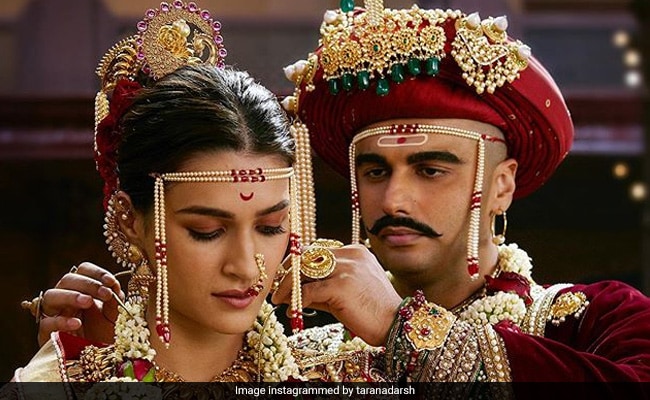 Arjun Kapoor and Kriti Sanon's new film Panipat, which opened to critical reviews on Friday, got a slow start at the box office, reported Bollywood trade analyst Taran Adarsh. The film "recorded low numbers" - Rs 4.12 crore - on its first day, stated Taran Adarsh in his report. He also mentioned that the Panipat is expected to show increase in box office numbers on weekends. Sharing the box office report of Panipat, Mr Adarsh tweeted: "Panipat records low numbers on Day 1... Reports [word of mouth] are positive and its business, hopefully, should see a turnaround on Day 2 and 3... Fri Rs 4.12 cr [2395 screens]. #India business... Showcasing at multiplexes affected due to excessive run time [close to 3 hours]. Take a look:

#Panipat records low numbers on Day 1... Reports [word of mouth] are positive and its biz, hopefully, should see a turnaround on Day 2 and 3... Fri Rs 4.12 cr [2395 screens]. #India biz... Showcasing at multiplexes affected due to excessive run time [close to 3 hours].

Directed by Ashutosh Gowariker, Panipat is based on the Third Battle of Panipat (present day Haryana) and Arjun Kapoor plays the role of Maratha warrior Sadashivrao Peshwa in it. Sadashivrao was the commander-in-chief during the 1760 battle and he died on the battle field. Kriti Sanon plays his wife Parvati while Sanjay Dutt portrays the role of Afghan king Ahmad Shah Abdali in Panipat. The film also features Mohnish Behl, Padmini Kolhapure and Zeenat Aman.

Reviewing Panipat for NDTV, film critic Saibal Chatterjee gave the film 2 stars out of 5 and wrote: "Falsification isn't the film's worst aberration. Bollywood fans have learnt to live with filmmakers taking liberties with history in the interest of an engaging story aimed at propping up one ideology or the other. But Panipat is anything but engaging."