Paltan will reportedly bring forth another chapter from the Indian history 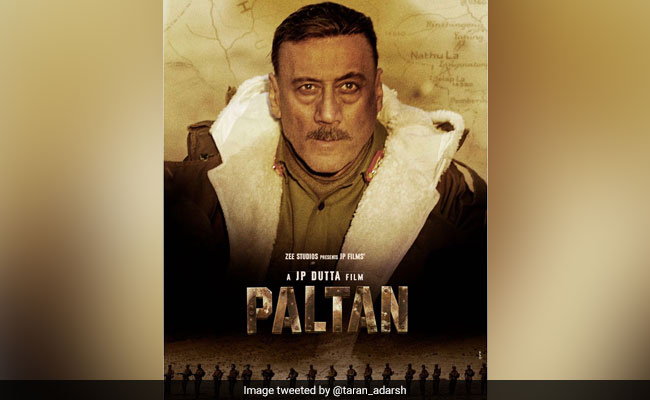 J P Dutta, who has directed war films like Border, LOC Kargil and Refugee, is back with yet another war film Paltan, which will reportedly bring forth another chapter from the pages of Indian history. The first look posters of the film have been unveiled, which feature Jackie Shroff, Arjun Rampal, Gurmeet Choudhary, Harshvardhan Rane, Luv Sinha and Siddhanth Kapoor in individual frames. Trade analyst Taran Adarsh introduced us to the cast on Twitter and wrote: "Presenting the principal characters of Paltan. Directed by J P Dutta, releases September 7 2018." What appears from the first look, Paltan is much like J P Dutta's previous films (Border and LOC Kargil), which is set against the backdrop of a battleground.

Jackie Shroff and Arjun Rampal shared their looks from the film on Twitter and wrote: "We might not know them all but we owe them all. It's time to join the paltan."

We might not KNOW them all but we OWE them all.
It's time to #JoinThePaltan@ZeeStudios_#JPFilms@RealNidhiDuttapic.twitter.com/vES1GRbknT

We might not KNOW them all but we OWE them all.
It's time to #JoinThePaltan@ZeeStudios_#JPFilms@RealNidhiDutta@SonuSood@harsha_actor#Gurmeet#luv#sidhant#7thsept2018#ltcolraisinghpic.twitter.com/QNCSbH0P4v

In an interview to IANS, Gurmeet Choudhary, who plays the role of an army officer in the film, said that he was trained by his father for the character. "My father served the army and his motherland for several years. He used to impart training to new recruits," IANS quoted Gurmeet as saying.

Luv Sinha, brother of actress Sonakshi Sinha, is making his Bollywood debut with Paltan. Sonakshi also shared the first look of Luv from Paltan on Twitter and wrote: "This is my brother, and he is a hero! Luv Sinha in Paltan.. September 7! Cannot wait."

THIS is my brother, and hes a hero! @LuvSinha In #PALTAN... 7th september! Can. Not. Wait. pic.twitter.com/JrDEzJJrbj

In an interview to IANS, Luv had all good things to say about his Paltan co-star Sonu Sood. The actor said that Sonu was "supportive" and had given him a lot of acting tips. "He was very supportive. He gave me a lot of tips while working out and also suggested that I start training with his trainer (with) who I have been working out for some time now. He is a very generous and confident performer who brings out the best in his co-actors in every scene," Luv told IANS.

J P Dutta is returning on the director's chair after a gap of 12 years. The filmmaker had last directed Umrao Jaan, which released in 2006. Paltan also stars Sonal Chauhan and Deepika Kakkar.