Rishi Kapoor had yet another visitor in New York 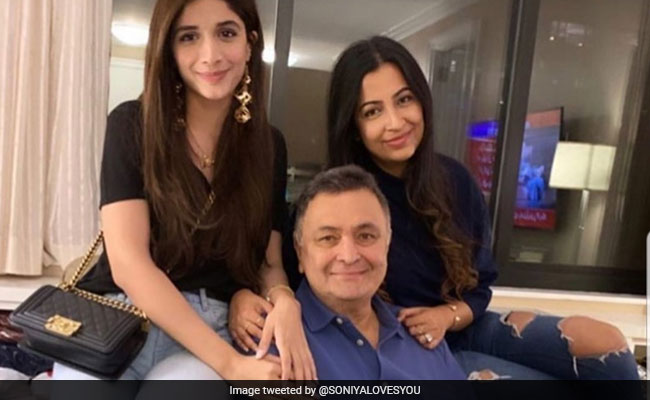 One more name was added to Rishi Kapoor's visitors' book in New York - Pakistani actress Mawra Hocane. A photo of Mawra Hocane and her friend posing with Rishi Kapoor began doing the rounds on the Internet on Friday evening, within minutes of which, Rishi Kapoor, responding to a fan's tweet to say that Mawra Hocane indeed paid him a visit in New York. He wrote in a tweet: "She is the famous actor from Pakistan, Mawra Hocane (left) and her friend Khatija. Sweet of them to visit us." Rishi Kapoor has been in the US for over eight months now - he was undergoing treatment for cancer. The actor is in remission and is expected to return home soon.

She is the famous actor from Pakistan,Mawra Hocane (left) and her friend Khatija. Sweet of them to visit us https://t.co/YM1tztOyQ6

Meanwhile, Mawra Hocane is a true-blue fan of Rishi and Neetu Kapoor's son Ranbir Kapoor, something which she's confessed in several interviews. After making her Bollywood debut with Sanam Teri Kasam in 2016, Mawra told IANS in an interview that: "On the top of my wishlist is Ranbir Kapoor. I hope I can get a chance to work with him soon." Mawra Hocane personally dropped in at Neetu Kapoor's birthday party in Mumbai in 2015 to wish her.

Rishi and Neetu Kapoor were recently spotted on a family dinner with daughter Riddhima Kapoor Sahni and granddaughter Samara.

Earlier, Mr Kapoor was spotted chilling with the team of his film 102 Not Out:

So much of love and affection. Umesh Shukla,Abhijat Joshi, Us with Saumya Joshi at "Tony's" Thank you "102 not out" guys for your affection we love you! pic.twitter.com/NrQD1Opzyt

When in New York, Rishi Kapoor has had celeb guests such as Deepika Padukone, Priyanka Chopra, Shah Rukh Khan, Aamir Khan, Vicky Kaushal and the Ambanis. Ranbir Kapoor also often drops by New York to meet his parents and so does his rumoured girlfriend Alia Bhatt.