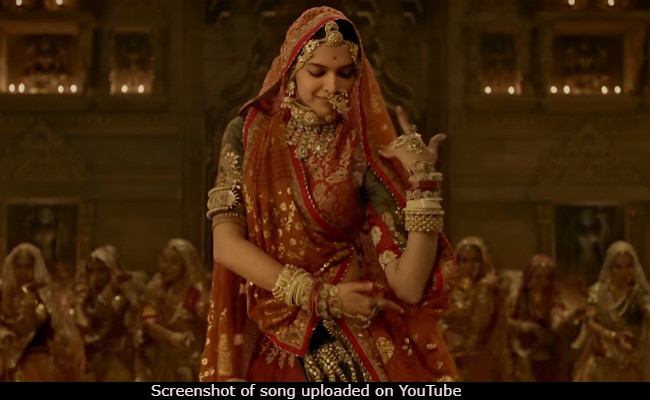 New Delhi: Twitter is known only to be kind on rare occasions but has everything nice to say about Ghoomar - the first Padmavati song featuring Deepika Padukone. The '#Ghoomar' trend spilled over to Thursday, all thanks to netizens who have rave reviews for the song because it depicts a very intrinsic part of Rajput culture: "This Ghoomar song portrays Rajasthani culture at its best". "This is authentic film making, celebrates Rajputana culture and pride with the new song Ghoomar, read a tweet while another added: "The Ghoomar song video speaks volumes about the Royal Rajputana culture and tradition." Tweets have also hailed Deepika for her brilliant performance. "Looks Deepika is made for this part," read a tweet. True that, we say.

Ghoomar - as the song is titled - is actually a Rajasthani folk dance, traditionally performed during auspicious occasions, one of them being a bride's arrival at her marital home. The song appears to be a spectacular portrayal of Rani Padmini's introductory performance for the Raja, Rawal Ratan Singh (played by Shahid Kapoor). Padmavati is the story of Chittor's Rani Padmini, who lead hundreds of Rajput women to commit jauhar to avoid being captured by Alauddin Khilji, after he invaded the fort of Chittor.

OMG! What a beautiful song Deepika's performance is entirely different from what she has been doing till today, Padmavati Rajput Pride

Folks rooting for Padmavati as a brilliant portrayal of the Rajput culture is a big boost for director Sanjay Leela Bhansali, whose ambitious period piece has been delayed twice already. After the movie began filming last year, sets in Kolhapur were attacked and torched in March, damaging valuable property, props and costumes. In January, Mr Bhansali was targeted while shooting on the sets of the movie in Jaipur's Nahargarh Fort and assaulted by members of Karni Sena. After the first looks came out, posters were burnt by members of the Shri Rajput Karni Sena, an outfit of the Rajput community, who object to the nature of reference to Alauddin Khilji in the movie. Ranveer Singh plays the part.

Promoted
Listen to the latest songs, only on JioSaavn.com
If Twitter as you convinced, watch the Ghoomar song here:


Meet Deepika Padukone as Rani Padmini in theatres on December 1.