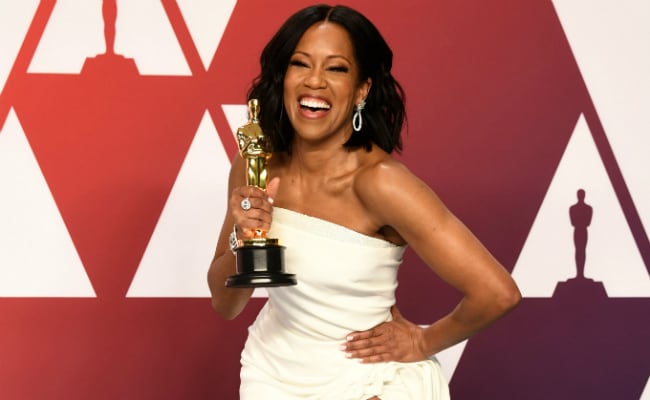 Regina King has been an actress for more than three decades but her recent focus on roles in dramas examining racism and black America have catapulted her to the A-list, and now, to Oscars glory. First-time nominee Regina King, 48, took home the Academy Award on Sunday for Best Supporting Actress for her emotional performance as a mother defending her daughter's boyfriend, wrongfully accused of rape, in If Beale Street Could Talk.

The film by Barry Jenkins (known for Moonlight) is an adaptation of a James Baldwin novel about a young couple, Tish and Fonny, whose lives are torn apart by the accusations against Fonny.

"To be standing here, representing one of the greatest artists of our time, James Baldwin - it's a little surreal," Regina King told the audience at the Dolby Theatre.

She thanked her fellow nominees - Amy Adams (Vice), Marina de Tavira (Roma), and Emma Stone and Rachel Weisz, both in The Favourite - calling them her "sisters in art."

Regina King's performance as Tish's mother Sharon was widely hailed, and she earned a Golden Globe for her work in January, and a Spirit Award on the eve of the Oscars.

Barry Jenkins has said he wanted Regina King because she could play the part of a mother who was "not a superwoman - but when she has to be, she is."

She almost didn't make it to the Oscars - 10 days ago, Regina King was nearly mowed down in her courtside seat at Madison Square Garden during a Knicks game when 76ers star Joel Embiid leapt into the crowd.

Yoooo. Thank you God and @JoelEmbiid for your athletic abilities. Crisis averted https://t.co/LLTtzECuV4

Born and raised in Los Angeles on January 15, 1971 to a special education teacher mother and an electrician father, King attended the University of Southern California.

But her acting career began while she was still in her teens, with a role on sitcom 227, one she would keep until the show's run ended in 1990.

The next year, she broke onto the big screen with a role in John Singleton's seminal 1991 coming-of-age drama set in South Central LA, Boyz N The Hood.

She would appear in two more films for director John Singleton, Poetic Justice and Higher Learning, before her next big break -- playing Cuba Gooding Jr's wife in the Tom Cruise mega-hit Jerry Maguire.

Though her big-screen career continued to thrive, with roles opposite Will Smith in Enemy Of The State and Jamie Foxx in Ray as singer Margie Hendricks, King turned back to television.

The reason? So her young son Ian could have an easier upbringing.

"My reps were, like, 'Are you sure about that?'" Regina King told The Los Angeles Times ahead of the Oscars. "I was sure. And it ended up being a blessing in every way."

After a recurring role on long-running spy thriller 24 as the president's sister, King starred as a detective on well-received police drama Southland about the LA Police Department, which ran for five seasons.

And then, the Emmys started coming.

Regina King won three in the space of three years. Two of them came for roles on American Crime," a raw anthology series exploring issues of race, discrimination and immigration.

She won the third for her portrayal of a grieving mother on Netflix mini-series Seven Seconds - about racial tensions in New Jersey after a black teen is critically wounded by a white cop.

King has also worked as a director, most recently on episodes of primetime favourites like This Is Us, Scandal and The Good Doctor.

On Golden Globes night, she made an extraordinary pledge in favour of gender equality in Hollywood.

"In the next two years... I'm making a vow - and it's going to be tough - to make sure that everything that I produce is 50 percent women," Regina King said to cheers.