One Night In Miami Review: A Rousing, Rattling Piece Of Cinema

One Night In Miami Review: The performances by the principal actors are the pillars on which the film stands. Regina King draws the absolute best out of her cast. 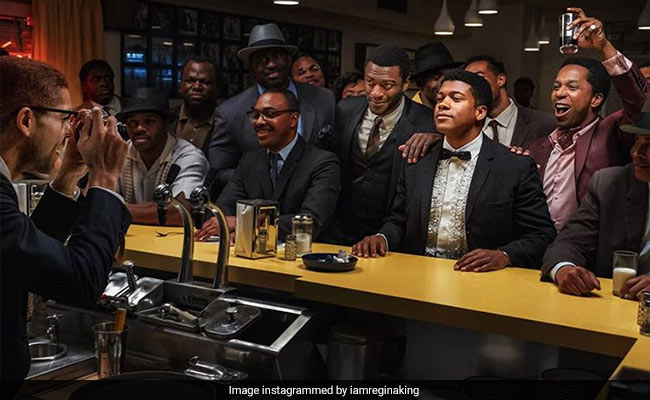 One Night In Miami Review: A still from the film. (courtesy iamreginaking)

Regina King, who won an Oscar in 2019 for her performance in If Beale Street Could Talk and is inarguably one of the finest American actresses in the business, debuts as a director with One Night In Miami.... What a blazing first film this is - a rousing, rattling piece of cinema that entertains and excites even as it engages with urgent themes with exacting equability.

Working with a sparkling screenplay by Kemp Powers (adapted from his own play of the same name), King employs a fictional 1964 meeting in a Miami motel room of four real-life African-American super-achievers to rustle up a blistering Black Power drama that alternates between donning velvet gloves and going bare-knuckles, extracting the maximum out of both.

One Night In Miami... is a reimagining of a rousing call to action in a crucial era of the American civil rights movement. It is just as much a consistently piercing rumination on race dynamics that has an instant contemporary resonance in the age of Black Lives Matter.

The writing is riveting, the acting first-rate, and the free-flowing energy that stems from the clash of worldviews fascinating and thought-provoking. The four men are famous individuals who might have been tempted to feel that they possess the power to withstand racial discrimination and get ahead in life without hindrances. But do they? Or, if they do, can they afford not to think about those that don't? That is the principal discourse at the heart of One Night In Miami....

As the pivotal night unfolds, they confront questions and look for answers. Understandably, the process isn't painless. It pushes them before an inner mirror that reflects aspects of the truth they cannot ignore. Fame, wealth and success may enable to stand apart but nothing can compensate for a history of humiliation.

The party that the four friends have isn't exactly a boozy, boisterous show of triumphal excess. Malcolm will have none of that. Sam wonders what he is doing in a bash where beer is out of bounds. Cassius Clay is happy dancing around the mirror admiring his countenance. He has good reason to be chirpy. He is the top dog in the fiercely competitive world of professional boxing.

It turns into an occasion for soul-searching and sabre-rattling as the men argue over the impediments that they face owing to the colour of their skin and friendly banter occasionally gives way to bouts of bruising recriminations. Malcolm, Cassius, Sam and Jim have company. It is the elephant in the room that rampages around them, catches them off-guard and brings out their innermost fears and misgivings as the night wears on.

Before the ideological melee begins to unfold, the film gives us introductory glimpses into the four men's minds. Malcolm is hard-pressed to convince his wife that all will turn out well for the couple and their daughters.

Cassius Clay (who isn't Muhammad Ali yet), in a 1963 fight against Henry Cooper at London's Wembley Park, hits the canvas after a knockout punch but nothing can force him to part from his swagger and rhetoric.

Singer-songwriter Sam Cooke has to surmount his own set of challenges as he performs at New York's Copacabana before an all-White audience. "You'll never be loved by the men you're trying to win over," Malcolm says to Sam later in the film in the course of a debate that threatens to cross the line of civility.

And the tall, strapping footballer Jim Brown finds himself at the receiving end of deep-rooted racism in the Deep South. A White man (Beau Bridges in a cameo) is all sugar and honey as he welcomes Jim to his porch but has no qualms about intoning that "you are a credit to the state" and then, immediately thereafter, preventing him from entering the home because "we don't allow niggers in the house".

That is where the US of A was back then. Has it moved an inch in all these years? The sentences that fly between the men, they are frequently angry and animated, has a topical ring to it despite the five and a half decades that have elapsed since then.

King crafts a canvas of precise dimensions on which the four friends stand out as vivid figures who are fighting the same good fight but are distinct in how - and what - they think about their status as Americans. None of the four is like the other three.

Malcolm is this serious-minded civil rights activist going through rough times because of his growing disillusionment with the movement. Cassius is the unabashedly bragging boxer who talks up the virtues of wrestler Gorgeous George who "preens and prances like a peacock". Sam Cooke is an R&B artiste justifiably confident of his talent but never sure if that is enough to earn him the right to sit at the music industry high table. Jim Brown appears to be the most sedate of the lot but when he does have a pow-wow with Malcolm after the latter has had a raging run-in with Sam, he makes his voice count.

Each man is at a crucial juncture of his life. Cassius is on the verge of embracing Islam and a new name. Jim is about to end his football career and join the movies. Malcolm is a year away from his assassination and Sam has even less time left.

The two men were shot for vastly different reasons, Sam by the end of the same year, Malcolm on February 19, 1965. The cracks that develop in their friendship in the course of the night - the two men are determined to stare each other down - is rife with profound pathos.

The performances by the principal actors are the pillars on which the film stands. It is easy to see how conducive the set-up is for actors when the person calling the shots is also an actor. Regina King draws the absolute best out of her cast.

Ben-Adir exudes poise and steeliness. Goree provides a perfect contrast with his flash and flair, conveying the irrepressible flamboyance of a Cassius Clay on the way up. Hodge and Odom Jr. are no less in the game - transmitting the turmoil of the times without missing a beat.

They constitute a classy quartet who, coupled with the director's unwavering hand over the film, makes One Night In Miami... an unforgettable portrait of a period of strife that has extended into the present day.