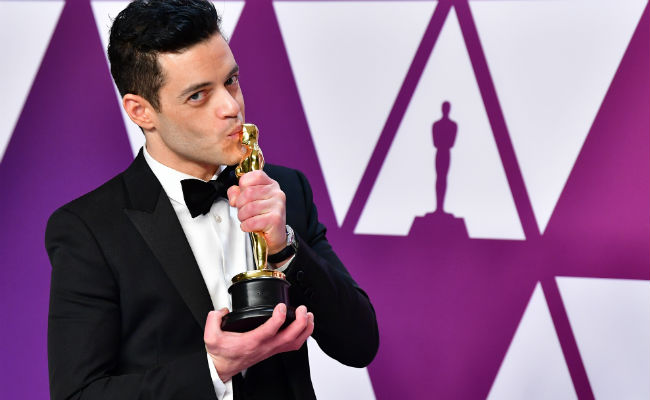 Rami Malek transformed his look, gait and accent to portray iconic Queen frontman Freddie Mercury in Bohemian Rhapsody -- an all-in performance that has catapulted him onto Hollywood's A-list and into Oscar history. Rami Malek, 37, on Sunday rode his Golden Globe and Screen Actors Guild success to the pinnacle of Tinseltown's award season, snatching the Academy Award for best actor in a showdown with Christian Bale (Vice).

"We made a film about a gay man, an immigrant, who lived his life just unapologetically himself," he said.

"The fact that I'm celebrating him and this story with you tonight is proof that we're longing for stories like this," he added, noting for the audience that he is "a first-generation American" of Egyptian descent.

Rami Malek's win seemed unlikely at the outset, given that he was about the only constant in the film's troubled road to the big screen: stars dropping out, director Bryan Singer departing mid-production, lackluster reviews.

But he likely sealed the deal -- even despite the much-maligned prosthetic teeth he wears in the film -- with his preening, foot-stomping recreation of Mercury's electric performance at Live Aid in 1985, which audiences loved.

The film was also a commercial success, raking in more than $820 million worldwide.

"Thank you to Freddie Mercury for giving me the joy of a lifetime. I love you, you beautiful man. This is for and because of you, gorgeous," Rami Malek said at the Golden Globes in January.

Before all the attention from BoRhap -- as it's known in Tinseltown - Rami Malek was turning heads on Mr Robot, a psychological hacker drama on which he stars with Christian Slater.

It was his breakout role, after humble beginnings growing up in suburban Los Angeles, in an Egyptian Coptic Orthodox family. He has an identical twin brother named Sami, and an older sister.

He attended high school in Sherman Oaks with actresses Rachel Bilson and Kirsten Dunst, and went on to study theater at the University of Evansville in Indiana, graduating with a fine arts degree in 2003.

His television career began the following year with a guest spot on popular show Gilmore Girls.

A variety of bit parts in television and film followed, including a role as the pharaoh Ahkmenrah in the Night At The Museum trilogy starring Ben Stiller and a part in the final Twilight movie.

Rami Malek has spoken about challenges avoiding being typecast, saying early this month at the Santa Barbara Film Festival: "I looked at the auditions and I knew I could probably get the terrorist role. It's funny but it's sad."

He has appeared in two films directed by Oscar nominee Spike Lee: Oldboy, a remake of an ultra-violent South Korean film, and the offbeat horror film Da Sweet Blood of Jesus.

On Mr Robot, Rami Malek stars as Eliot, a young programmer who is also an unstable vigilante hacker -- who gets involved in hacking the shadowy company he works for.

Rami Malek has won an Emmy for the role, and the fourth and final season is due to air on USA Network later this year.

But his work as Mercury -- the flamboyant Tanzania-born Farrokh Bulsara, who moved to London and became a legend before dying in 1991 at age 45 -- will likely lead to more work on the big screen.

Rami Malek's wide, expressive eyes and devilish grin came in handy for his portrayal of Mercury, who was known for his stunning vocal range and on-stage antics.

"I said yes right away to playing Freddie Mercury," he said in Santa Barbara. "Moments later, I thought, 'Ok, what have you done? This is crazy'."

"I would look at all the footage of him and see this performer that was otherworldly," he added. "He was like a superhero to me... The only way to demystify him was to look at that human being behind that superhero."

After the film wrapped, Rami Malek had the prosthetic teeth cast -- in gold, just like the Oscar statuette he now owns.