Oscars 2019: Best Actor Rami Malek Fell Off Stage. But Don't Worry, He Was Partying Soon After

Oscars 2019: Rami Malek dropped the precious Academy Award he had just been handed but seemed too be okay 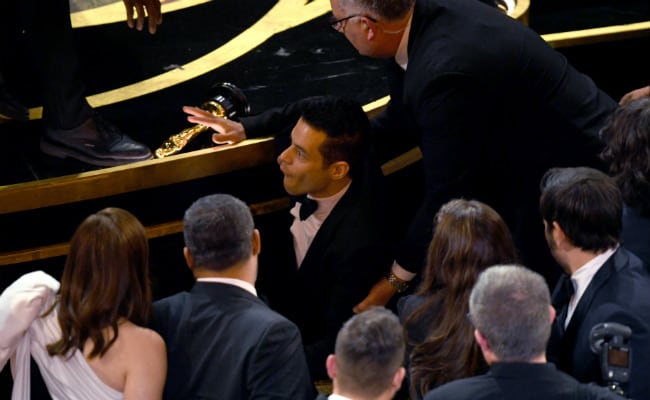 Rami Malek's Best Actor Oscar acceptance after winning for Bohemian Rhapsody ended somewhat disastrously - he tumbled right off the stage as he was coming off it and had to be helped up - pictures below. Rami dropped the precious Academy Award he had just been handed but seemed too be okay - although paramedics were called in to attend to the 37-year-old star, as reported by Entertainment Weekly. Luckily for Rami Malek, no bones were broken and no harm was done. We know because he was pictured opening a bottle of champagne after the Oscars at the Governor's Ball. Here's a look at Rami's fall: 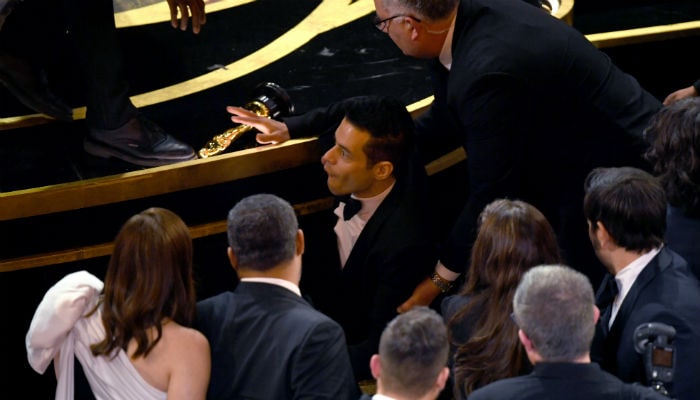 Rami Malek fell off from the Oscar stage (courtesy AFP) Rami Malek being attended to by medics (courtesy AFP)

And there was Rami Malek, right as rain, popping the bubbly later like nothing at all had happened: Now, nobody really bats an eye when somebody trips over themselves at the Oscars. Because if it's not Jennifer Lawrence (Twice? Thrice maybe even), it's someone else. Twitter, however, wasn't going to let Rami Malek's Oscar blooper pass without comment.

Why is no one talking about Rami Malek falling off the stage after his acceptance speech and paramedics being called?? #Oscarspic.twitter.com/5ok6Y6O9jV

Rami Malek walking straight of the stage, falling down Video by legend @MichaelBearden#RamiMalek#Oscarspic.twitter.com/DN4aq3gogC

#RamiMalek fell off the stage at the #Oscars shortly after winning the award for Best Actor in a Leading Role.

#RamiMalek falling off the stage and then drowning everyone in celebratory champagne is the most Freddie thing he could have done at the #Oscars. pic.twitter.com/kzUobNosyT

We totally get why Rami Malek was so excited he missed his footing. The Egyptian-origin actor's performance as rock legend Freddie Mercury has overwhelmed everyone who's seen it and as Rami pointed out himself in his acceptance speech, the honouring of a non-white actor for playing a gay non-white man is hugely significant: "We made a film about a gay man, an immigrant, who lived his life just unapologetically himself. The fact that I'm celebrating him and this story with you tonight is proof that we're longing for stories like this," Rami Malek said.

Rami Malek attended the Oscars with his girlfriend Lucy Boynton, also his co-star in Bohemian Rhapsody.

Bohemian Rhapsody was the most awarded film at the Oscars this year, also winning the awards for sound editing, sound mixing and film editing.