Oscars 2018: A Tribute To Sridevi And Shashi Kapoor From Hollywood

Oscars 2018: Late Bollywood stars Shashi Kapoor and Sridevi were honoured at the 90th Academy Awards ceremony in the 'Memoriam' montage 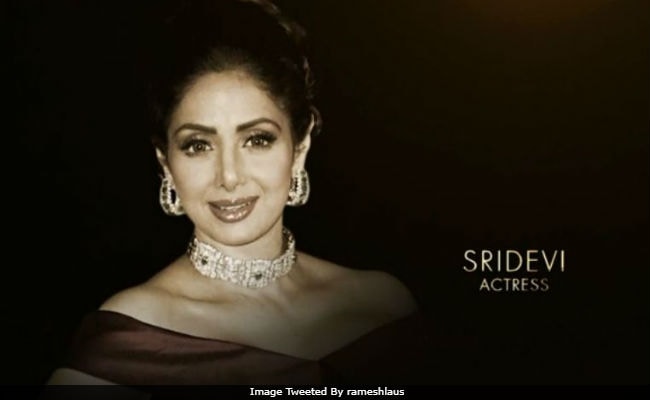 Sridevi was remembered in the montage section (Image courtesy: rameshlaus)

New Delhi: Bollywood stars Shashi Kapoor and Sridevi were among those honoured at the 90th Academy Awards ceremony in the 'Memoriam' montage, which pays tribute to everyone the film industry has lost in the past year. This year, set to Eddie Vedder performing a Tom Petty song live, 'In Memoriam' also remembered former James Bond Sir Roger Moore, French star Jeanne Moreau, actors Martin Landau and Harry Dean Stanton, actor and playwright Sam Shepard, and directors George Romero and Jonathan Demme. Shashi Kapoor died last year in December. He was 79 and had been ill and in a wheelchair for years. Sridevi, 54, died suddenly two weekends ago in Dubai - she accidentally drowned in her hotel bathtub, a postmortem revealed.

Shashi Kapoor was not unfamiliar to international cine-goers. He starred in several Merchant-Ivory films of the Sixties, Seventies and Eighties, among them The Householder, Shakespeare Wallah and Heat And Dust. One of his last films, 1993's In Custody, was also a Merchant-Ivory production. James Ivory, one-half of the collaborative team, won an Oscar today for Best Adapted Screenplay for the film Call Me By Your Name.

Sridevi, considered the first female superstar of Indian cinema, made 300 films in several languages over 50 years. Some of her finest performances are in the films Sadma, Mr India, Chandni and English Vinglish.

Wonderful gesture by the @TheAcademy to honor Late #Sridevi Ji in the Memoriam section of #Oscars90pic.twitter.com/h8H8GUrg4j

Oscars. Thank you for remembering Shashi Kapoor and Sridevi. Thrilled to see the name Raj Kapoor as the executive producer of the show. We are on the threshold of world cinema! pic.twitter.com/YMkqntZ4Xz

Promoted
Listen to the latest songs, only on JioSaavn.com
Both Shashi Kapoor and Sridevi, who were Padma awardees, were cremated with state honours.