"You are never dead to us until we forget you," wrote Soha Ali Khan 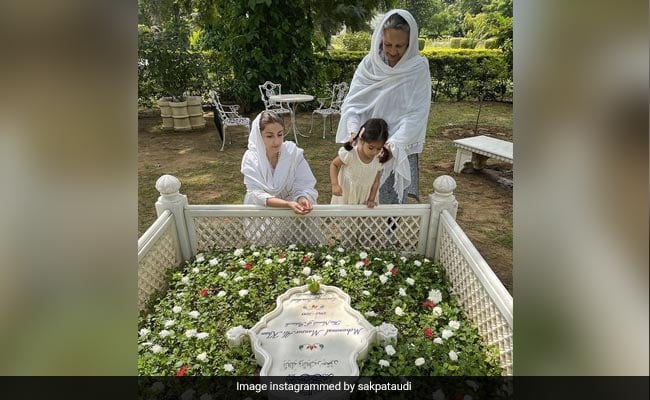 On Mansoor Ali Khan's 10th death anniversary, his family members remembered him. Mansoor Ali Khan's daughter and actress Soha Ali Khan posted a picture from his grave. The legendary cricketer is buried at his ancestral home, Pataudi Palace. Soha Ali Khan posted a picture with her mother Sharmila Tagore and daughter Inaaya Naumi Kemmu and she wrote in her caption: "You are never dead to us until we forget you.#inmemory #10years." In the comments section, Soha's Instafam paid tribute to the late cricketer.

This is what Soha Ali Khan posted:

Jewelry designer Saba Ali Khan too posted a tribute for her father and she wrote: "Abba... I miss you every day and know you watch over me . It doesn't feel like a decade since you left us... Only just yesterday. You'll stay in our hearts forever. Love you always."

Sharmila Tagore, who was launched by the iconic filmmaker Satyajit Ray in the 1959 Bengali film Apur Sansar, stepped into Bollywood with the 1964 film Kashmir Ki Kali. She has worked in many successful Bollywood films like Aradhana, Chupke Chupke, Amar Prem among others.