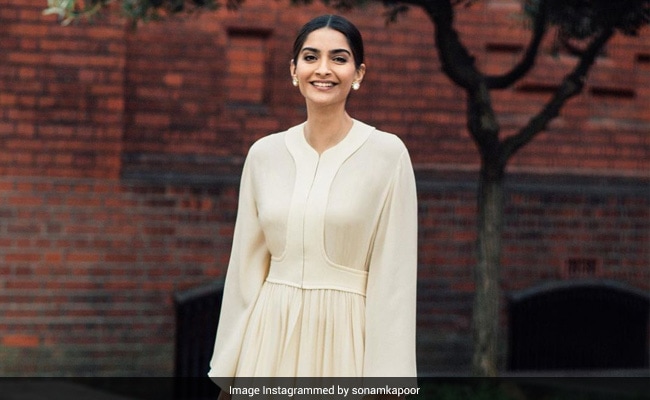 When Sonam Kapoor is on screen, it is tough to take your eyes off her. So you can imagine what a treat we were in for when the actress posted not one, but a series of photos where she is seen flashing a million-dollar smile. And why wouldn't she, given that the actress was spending some quality time with her husband, entrepreneur Anand Ahuja on a special date night. The bibliophile that she is, Sonam expressed her state of mind with a poem. In the caption, she shared a Rupi Kaur poem which read, “You do not just wake up and become the butterfly… Growth is a process.”

Along with it, she further added, “All smiles on a date night.” The stunning pictures were a huge hit with the actress' fans and followers. Even her doting father, actor Anil Kapoor could not resist but say “beautiful” in the comment section. Sonam's mother, designer Sunita Kapoor also left a bunch of heart emojis in the comment section.

Singer Kanika Kapoor and designer Sandeep Khosla, too, expressed their love for Sonam in the comment section. Take a look at the photo here.

This is not the first time we are getting a glimpse of what the couple's date nights look like. Just a few days ago, the actress was seen spending some quality time with her husband in a lovely wayside cafe in London. Not only did Sonam give us a look at the setting, but the duo also smiled for a short boomerang video for Sonam's followers.

It wouldn't be wrong to say that the couple has been painting the town red for the past several weeks with sweet photos and cute comments on each other's posts. For Sonam's birthday, Anand even showed us all what his phone's wallpaper looked like. And yes, it was a lovely image of the happy couple. Sharing the screengrab, he wrote, “I know how much you love wallpapers - well you're the only wallpaper I need! Happy Birthday my forever wallpaper.” Did someone say, mushy?

Sonam spent a large part of the pandemic in London with her husband. Though she admitted that she missed her family in Mumbai, she was also quick to add that she was grateful to be spending the time with her husband. In a detailed note, she said, “I miss India so much, and I've been craving to go back home and see my family and friends desperately. But I realise I might be dissing my new home a little bit that has given me so much including my beautiful husband, Anand Ahuja."

Sonam Kapoor got married to Anand Ahuja in 2018. She was last seen in the film AK vs AK, alongside her father and director-actor Anurag Kashyap. She will appear next in Shome Makhija's film, Blind.