On Sanjay Dutt's Birthday, First Look Of Actor As Adheera In KGF: Chapter 2

"It's been a pleasure working on this film and I couldn't have asked for a better birthday gift," wrote Sanjay Dutt 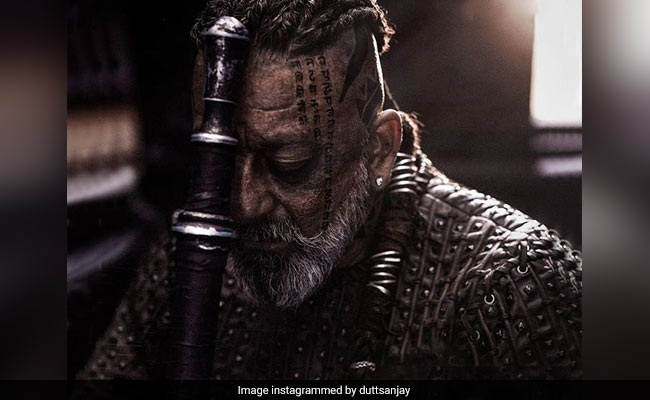 Just like his last birthday treat, this year too Sanjay Dutt had a KGF: Chapter 2 special surprise for fans. On his 61st birthday today, Sanjay Dutt revealed his full fledged first look as the menacing Adheera from Yash's KGF: Chapter 2 - on his birthday last year, he had offered just a glimpse. "It's been a pleasure working on this film and I couldn't have asked for a better birthday gift... Special thanks to all my fans who have always showered me with their love and support," Sanjay Dutt wrote, also thanking the film's team. Headlined by south actor Yash, KGF: Chapter 2 casts Sanjay Dutt as the antagonist named Adheera.

In the first look poster, Sanjay Dutt as Adheera sports a dark look in a bearded and moustachioed persona, with his hair styled in braids. Sanjay Dutt, with a tattooed face and holding what appears to be metal sceptre, gives off rather grim vibes. Sanjay Dutt's best friend Paresh Ghelani (remember Kamli from Sanju?) described the look best - "Fear has a new name," he wrote in the comments.

On his last birthday, Sanjay Dutt thanked Yash for introducing his character Adheera with this message. That's when we knew what was coming. Speaking to news agency PTI earlier, Sanjay Dutt had described his character like this: "Adheera's character is very powerful. If you have seen Avengers, you would know Thanos. So Adheera is like him. He is a very dangerous character with a dangerous get-up. And that's the zone I was looking for."

Thank you @thenameisYash. Truly happy and excited to be a part of #KGF as #Adheera. See u soon Monster!!! ???? #Repost @thenameisyash ・・・ Turning 60 hasn't and will not stop this KhalNayak from charming us!! Let your legacy continue @Duttsanjay. HAPPY BIRTHDAY Sir. Welcome to the world of #KGF ????

On Yash's birthday this year, the makers introduced Yash as how he will be seen in Chapter 2:

The first part - KGF - opened to screens in India in December 2018 and set the box office ablaze. Prashanth Neel returns as the director for the second part as well. KGF is scheduled to hit screens in October.