On National Handloom Day, Karisma Kapoor Reveals Her Love Of Sarees Began With This Film 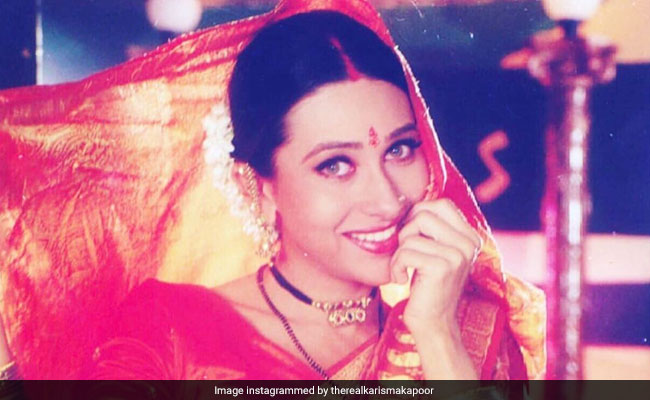 We love Karisma Kapoor's latest Instagram entry and for more than one reasons. To begin with - the post perfectly encapsulates the theme of National Handloom Day (more on that later). Secondly, it features a still from the 1999 film Biwi No 1, a film that Karisma featured in. The 45-year-old actress shared a throwback photograph of herself, dressed in a red saree and revealed that her love for the six-yard outfit began with the film. Karisma did not reveal the name of the film and left the guessing to her Instafam. The comments section was full of guesses from fans and Biwi No 1 appeared to be a recurring answer on the post.

Sharing the post on her Instagram profile, Karisma wrote: "My love for saree and Indian handloom started from this film. Any guesses?" The actress added the hashtags #Nationalhandloomday2019 #Saree #Indianwear #Indianhandloom and #Indianweaves to her post.

Without much ado, check out Karisma Kapoor's post here:

My love for the saree and indian handloom started from this film Any guesses ?? #nationalhandloomday2019 #saree #india #indianwear #indianhandloom #indianweaves

An iconic friendship in Indian Cinema #rahul #nisha Any guesses which film ? Happy friendship day everyone !

Here are some more pictures from Karisma Kapoor's treasure trove of throwback pictures. You can thank us later.

On the professional front, Karisma Kapoor was last seen in a special appearance in Aanand L Rai's Zero, starring Shah Rukh Khan , Katrina Kaif and Anushka Sharma. She will next be seen in ALTBalaji's web-series Mentalhood.