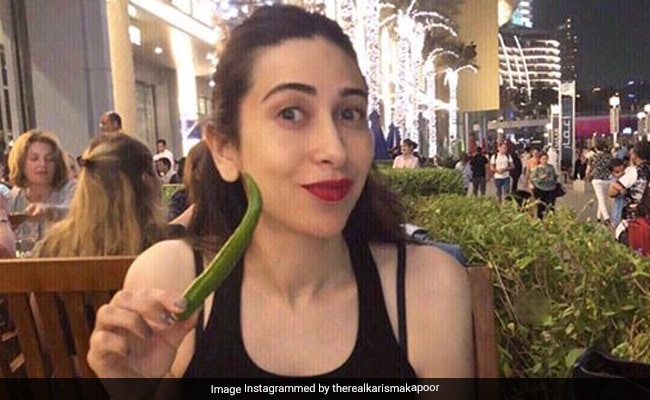 Karisma Kapoor made the best use of 'Throwback Thursday' and shared a stunning picture of herself on her Instagram profile. We aren't sure when or where it was taken, Karisma didn't say. However, it will be tough to say what we liked more about the post, the actress' priceless expression or the caption that she added to it. In case you are wondering what the caption was, Karisma borrowed a line from the song Main Toh Raste Se Ja Raha Tha from her 1995 film Coolie No 1 and she wrote: "Tujhko mirchi lagi toh mai kya karun." The picture got lots of love from fans and heart reacts from her cousin Riddhima Kapoor Sahni and actor Ranveer Singh.

It wouldn't be wrong to say that Karisma Kapoor has a treasure full of throwback pictures and anyone who has been following the actress on Instagram, would agree. A few days ago, Karisma shared a video from the 1971 film Kal Aaj Aur Kal, which featured her parents - Randhir Kapoor and Babita. Sharing the video on Instagram, she wrote: "On a gloomy day all you need is watching mama and papa romance in the rain." ICYMI, this is what we are talking about:

Karisma often keeps her Instafam busy by posting throwback pictures and asks them to guess the name of the film. This is what we are talking about:

In terms of work, Karisma Kapoor will next be seen in ALTBalaji's web-series Mentalhood.