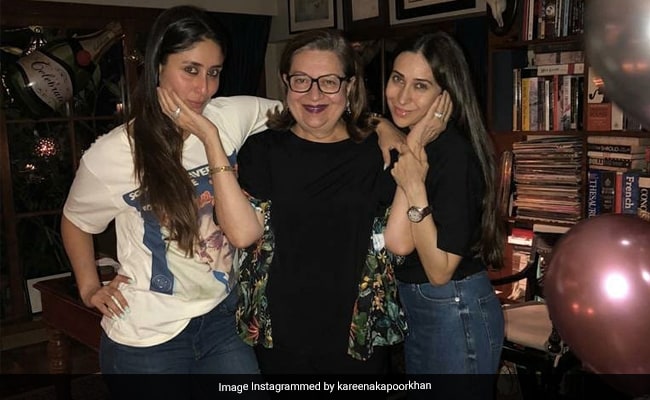 Happy birthday, Babita! The veteran actress celebrates her 74th birthday today and the festivities have already begun on social media. Kareena Kapoor posted an adorable birthday wish for her mother Babita on Instagram and it also comes with a bit of her signature sense of humour. Describing Babita as Kareena and her sister Karisma's support system, the Laal Singh Chaddha actress wrote: "Happy Birthday to our strength, our world... my mother." Adding a touch of sass to her post, Kareena made an ROFL promise to her mother on her 74th birthday, which reads like this: "Lolo and I will of course trouble you forever... that's what mothers are for."

Kareena also zeroed in on a photo of herself and Karisma chilling with mom Babita. In the comments section, birthday wishes for Babita poured in from the likes of Kareena and Karisma's cousin Riddhima Kapoor Sahni, their best friend Amrita Arora and designer Manish Malhotra.

Meanwhile, Karisma Kapoor wished Babita on her birthday with this emotional post:

Last year, Kareena Kapoor set major daughter goals when she posted a photo of getting an old school head massage from Babita. In her post, Kareena wrote there's nothing better than "Maa ke haath ka... maalish." Kareena was five months pregnant at that time.

Kareena Kapoor and Saif Ali Khan welcomed their second child - a baby boy - in February, a little ahead of which the couple moved to a new apartment. Babita and Karisma are often spotted visiting Kareena and her baby son at her residence. Kareena and Saif are also parents to four-year-old Taimur. In terms of work, Kareena will next be seen opposite Aamir Khan in Laal Singh Chaddha.

Malaika Arora Lights Up Instagram With A Post-Workout Pic