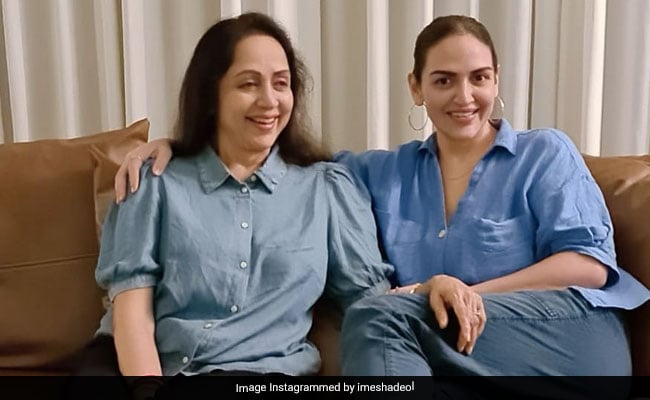 On veteran actress Hema Malini's 72nd birthday, her daughter Esha Deol shared a heart-warming birthday wish for her on social media. Esha is the daughter of the Dream Girl actress and Dharmendra. Posting an adorable picture of herself and Hema Malini, she wrote: "Happy birthday, mamma. God bless you. Stay happy and healthy. Love you my super woman, my tinkerbell ... my beautiful mother!" In the photo, the mother-daughter duo can be seen twinning in blue outfits. They look happy as they pose for the camera. Reacting to Esha Deol's post, Abhishek Bachchan also wished the veteran actress and wrote: "Happy birthday, Hema Aunty."

Other than Esha Deol, Dharmendra and Hema Malini are also parents to Ahana Deol, who is a trained Odissi dancer, just like her sister and mother. Before Hema Malini, Dharmendra married Parkash Kaur. They are parents to actors Sunny and Bobby Deol and daughters Vijeeta and Ajeeta.

On Janmashtami, Esha Deol posted a really cute blast from the past featuring herself and Hema Malini. "Now that's me! Back in the day, my mum would dress me up as baby Krishan on the occasion of Janmashtami and today, as we celebrate this occasion, I follow the same tradition with my kids too!" she wrote.

now that's me !!! back in the day my mum would dress me up as baby Krishan on the occasion of janmashtami ... & today as we celebrate this occasion I follow the same tradition with my kids too ! #happyjanmashtami to all of you ..... & all parents enjoy dressing up your kids too as baby Krishna & Radha

Esha Deol has featured in a number of films. She made her acting debut in 2003 with Koi Mere Dil Se Poochhe and went on to work in films like Na Tum Jaano Na Hum, Dhoom, LOC Kargil, No Entry, Kaal, Just Married and Tell Me O Kkhuda.

Hema Malini, one of the top actresses of the Seventies and the Eighties, is best-known for her performances in films like Johnny Mera Naam, Kranti, Naseeb, Satte Pe Satta, Seeta Aur Geeta, Dream Girl, Sholay and Baghban, to name a few. She was last seen in romantic comedy Shimla Mirchi, co-starring Rakul Preet Singh and Rajkummar Rao.