"Happy birthday to the most outstanding, magnificent and admirable actor of Indian cinema," wrote Shatrughan Sinha 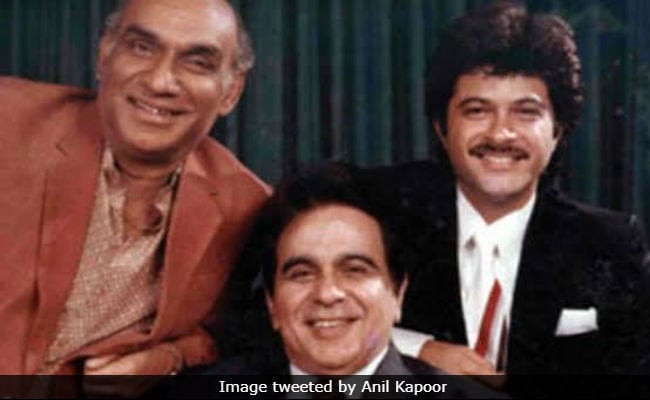 On Dilip Kumar's 96th birthday, Bollywood stars wished the veteran actor in the most special manner. Anil Kapoor, Shatrughan Sinha and filmmaker Subhash Ghai shared throwback pictures of themselves along with the actor on Twitter, while Amitabh Bachchan, Abhishek Bachchan and others wished the actor by posting loved up wishes. Filmmaker Subhash Ghai, who has worked with Dilip Kumar in films such as Karma, Vidhata and Saudagar, shared a grey scale throwback picture and described the 96-year-old actor as the "greatest legend." He tweeted: "How can I express this greatest legend Dilip Kumar. Who taught me so many values and virtues of life. While making three films with him - Vidhata, Karma and Saudagar. He inspired me to set up Whistling Woods International (Subhash Ghai's film school) for the next generation."

How can I express this greatest legend DILIP KUMAR
Who taught me so many values n virtues of life While making 3 films with him #VIDHATA#KARMA
#SAUDAGAR
He inspired me to set up @Whistling_Woodsinternational
For next generation
HAPPY BIRTHDAY SAHEB pic.twitter.com/sbd69eYyhK

Anil Kapoor, who co-starred with Dilip Kumar in the 1984 film Mashaal, the 1886 film Karma and the 1982 film Shakti, also shared a blast from the past birthday wish for Dilip Kumar. He shared a photograph of himself along with Dilip Kumar and Yash Chopra, who had directed Mashaal.

Wishing the icon & all-time legend @TheDilipKumar Saab a very Happy Birthday! Thank you for all the amazing movies & memories! pic.twitter.com/HqImV8nxHV

Shatrughan Sinha, who shared screen space with the 96-year-old actor in the film Kranti, posted a throwback picture on Twitter and he accompanied it with an extensive caption. In his tweet, Shatrughan Sinha described the actor as "a legend, icon, thespian and an institution." He wrote: "Happy birthday to the most outstanding, magnificent and admirable actor of Indian cinema, spanning a career of six decades. A great humanitarian and humble human being. Satyajit Ray aptly named him 'Ultimate method actor'."

...bringing naturalness to every character with unmatched finesse.
Thank you for the unforgettable movies & songs which are special treasures for a lifetime. Wishing you joy, peace, happiness, comfort & healthy life ahead.#HappyBirthday. pic.twitter.com/5NX2VcBg3c

Not a throwback picture per say but Amitabh Bachchan, who had worked with the actor in Shakti, wished the "ultimate master of his craft" on Twitter. Here's what he wrote:

T 3022 - The ultimate MASTER of his craft .. Dilip Kumar - Mohammed Yusuf Khan .. turns 96 .. prayers and duas for his good health and happiness always .. the history of Indian Cinema shall always be written as 'before Dilip Kumar and after Dilip Kumar' pic.twitter.com/qAsOW9v5uy

Here are some more birthday wishes for Dilip Kumar, posted by Bollywood celebs:

Happy birthday @TheDilipKumar sahab. We pray for your happiness and good health. Have a wonderful day.

"Today marks the 96th birthday of an actor who revolutionised acting and set standards impossible to meet even today. The legendary @TheDilipKumar. Plan to watch one of his classics tonight with family. Sahab, aapka saaya hum sab per humesha salamat rahe. Ameen." AZ

A very happy birthday Dilip Sahab,
Thank you for being such an inspiration to millions!
#DilipKumar

One of my biggest regrets as an actor is never being able to meet #DilipKumar saab.. many have tried to copy him but they never could bring about the realism he brought to his performances .. originality is rare and so is @TheDilipKumar .. wishing you a very happy birthday sir pic.twitter.com/sdHLVH8E5X

Dilip Kumar celebrated his 96th birthday with his wife Saira Banu, and family members. In an interview with news agency IANS, Dilip Kumar's family friend Faisal Farooqui said that Saira Banu will be hosting a small get together for the actor, which will be attended by the actor's brother and sisters. "He (Dilip Kumar) has not done that in a very long time and birthdays are occasions where the family gets together and some close friends get together. So, saab's brothers and sisters and Saira Banuji's extended family will come and then my family and some close friends gather together," IANS quoted Faisal Farooqui as saying.

Dilip Kumar is best-known for his performances in films such as Kohinoor, Mughal-e-Azam, Shakti,Naya Daur and Ram Aur Shyam among others. He was last seen in the 1998 film in Qila.