"He is recuperating in such a way that he does not need any hospitalisation now," said Dilip Kumar's family friend Faisal Farooqui 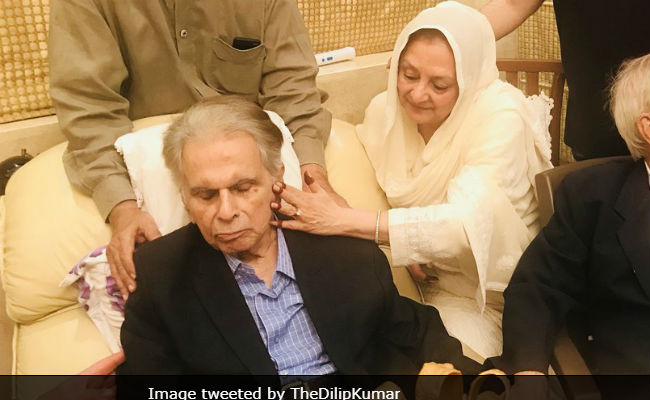 Veteran actor Dilip Kumar, who will turn 96 on Tuesday, will celebrate his special day with his close friends and family members, reports news agency IANS. During a recent media interaction, Dilip Kumar's family friend Faisal Farooqui said that Mr Kumar has not celebrated his birthday in a long time. He also revealed that Saira Banu (Dilip Kumar's wife) will host a small get together at her residence, which will be attended by the actor's brother and sisters. Faisal Farooqui told IANS: "He (Dilip Kumar) has not done that in a very long time and birthdays are occasions where the family gets together and some close friends get together. So, saab's brothers and sisters and Saira Banuji's extended family will come and then my family and some close friends gather together."

Faisal Farooqui also revealed that the 95-year-old actor is "not very fond of celebrating his birthday" and told IANS: "Even when saab was active socially and personally, he was not fond of big celebrations. So, doing justice to that tradition, Sairaji has not planned anything big." Mr Farooqui added, "Saab has never wanted to celebrate birthdays. The last birthday we celebrated as a big event was his 89th birthday, which was in 2011 and of course, saab enjoyed that. Dilip Saab is not a big fan of celebrating birthdays."

During the interview, Mr Farooqui also shared an update about Dilip Kumar's health and said that he is at home and "doesn't need any hospitalisation." "He is recuperating in such a way that he does not need any hospitalisation now. He is at home and has a restricted diet, which is taken care of by Saira Banuji," IANS quoted Faisal Farooqui as saying.

Here are the pictures from Dilip Kumar's 95th birthday.

So it was a small gathering. Saab cut the cake few minutes ago. I guess all the flash irritated him big time. May Allah bless Dilip Saab with a longgggg and healthyyyyy life. -FF pic.twitter.com/bh5lsxhk86

Dilip Kumar is best-known for his performances in films such as Kohinoor, Mughal-e-Azam, Shakti, Naya Daur and Ram Aur Shyam among others. He was last seen in the 1998 film in Qila.