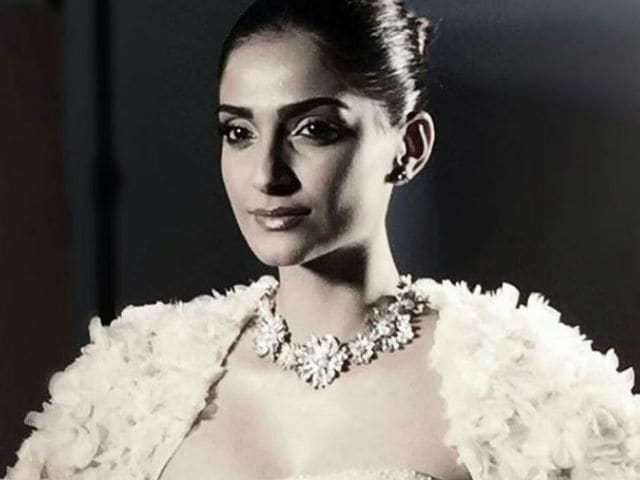 The 30-year-old actress looked absolutely gorgeous dressed in a column gown with a feathery cape attachment by Ralph & Russo (again) for her second red carpet appearance at the ongoing Cannes Film Festival. She styled her hair in a sleek chignon and accessorized with a Bvlgari choker. This video of Sonam in her hotel was shared by L'Oreal Paris India's official Instagram account, currently operated by the star.

Sonam's producer sister Rhea, who helps style her, shared this pic on Instagram:

Couture, Cannes, Champagne and Curves. Brought to you by @sonamkapoor @icannesbylorealparis and @ralphandrusso haute couture. Glam by @namratasoni @stephanelancien Jewels by @bulgariofficial

Sonam has so far thrilled fashion critics with her choice of ensemble on the Croisette. Her first look today was courtesy Ralph & Russo.

Meanwhile, Sonam's first day at the 69th edition of the film festival started with a chic Anamika Khanna ensemble:

Next, she was spotted in an edgy traditional look, courtesy Rimzim Dadu:

Last one I swear, stole from @namratasoni @icannesbylorealparis @lorealmakeup get the exclusive style breakdown on the sonam kapoor app!

She wrapped her day with a serene white gown by Ralph & Russo at the screening of Mal de Pierres (From the Land of the Moon).

A slow clap for Sonam.

This year, Sonam Kapoor will attend the amfAR gala, a charity event which aims to create awareness about AIDS, on May 19 for the first time. The actress will fill the spot left vacant by her colleague Aishwarya Rai Bachchan who will give the gala a miss due to work commitments. Aishwarya's Sarbjit, which was screened at Cannes, will release in India on May 20.