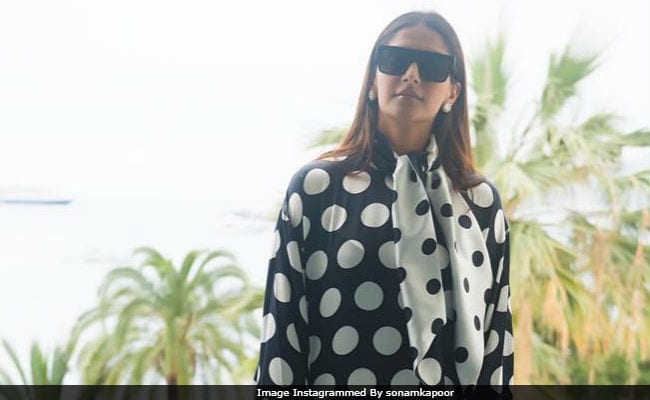 New Delhi: Yes, Sonam Kapoor has finally checked into the French Riviera and her OOTD is a black and white maxi dress from the studios of Mother of Pearl. Sonam has aced her look with Chloe boots, a black tote bag by Bottega Veneta and trendy sunglasses. (Classy is the word). "Hey Cannes," Sonam captioned her posts. She has been styled by her sister Rhea Kapoor (who isn't accompanying her though) and Deep Kailey. Sonam Kapoor, 32, flew out of India last night minus her husband Anand Ahuja. This is Sonam's eight appearance at the Cannes Film Festival. She will walk the red carpet tonight and on Tuesday.

Take a look at Sonam Kapoor's Day 1 at the Cannes Film Festival.

(Sonam, we can't wait to see you on the red carpet tonight).

From the Cannes-bound flight, Sonam posted an emotional message for her sister Rhea on her Instagram story and said, "It is the first Cannes I am going to without my sister. She has to release Veere Di Wedding. I miss you, Rhea and I am super nervous without you."

Promoted
Listen to the latest songs, only on JioSaavn.com
Sonam and Anand posted similar Instagram stories a while ago and wrote they are missing each other. The shared these picture. (Anand also had a message for Sonam and her team). Sonam Kapoor and businessman Anand Ahuja married on May 8 in Mumbai.