"The first ever Indian performer at this most prestigious World Stadium," wrote Big B 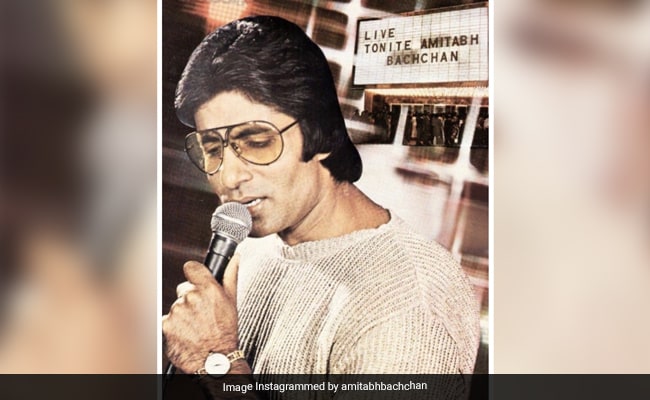 Amitabh Bachchan, in a throwback state of mind on Thursday night, posted a picture of himself from his "first live performance" at the Madison Square Garden in New York. The 78-year-old actor looks quite young in the photograph, which features him holding a microphone with a signboard in his background, the text on which read: "Live Tonight Amitabh Bachchan." Sharing the photo, Big B wrote: "1983...! My first LIVE performance... that signboard at the back is Madison Square Garden New York... the first ever Indian performer at this most prestigious World Stadium." Reacting to her grandfather's throwback post, Navya Naveli Nanda, who currently in New York, dropped a red heart icon in the comments section.

On Thursday morning, Big B recalled the time when a film's success was measured in weeks it lasted in cinema halls. He posted a picture of himself that appears to be from the Seventies and wrote: "The 1970's .. And the years when films did 50 weeks and 100 weeks ... And 6-7 of them being released in the same year and all doing more than 50 weeks ...Now OTT millions make success graphs."

A few other recent posts on Amitabh Bachchan's Instagram feed are also throwback pictures of the superstar from his old films and with his wife, actress-politician Jaya Bachchan.

"30 years of AJOOBA!... how time has passed," he captioned this photo.

Revealing the story behind his current home Jalsa, Amitabh Bachchan wrote: "'Chupke Chupke' our film by Hrishikesh Mukerji... closing today at 46 years!! This house you see in the picture is Producer NC Sippy's house .. we bought it, then sold it, then bought it back again... rebuilt it.. this is our home now JALSA! Many films were shot here... Anand, NamakHaram, Chupke Chupke, Satte pe Satta, and many more."