On A Scale Of 1 To Sara Ali Khan, How Many Of These Workout Routines Can You Do?

"When in doubt, you must work out," wrote Sara Ali Khan 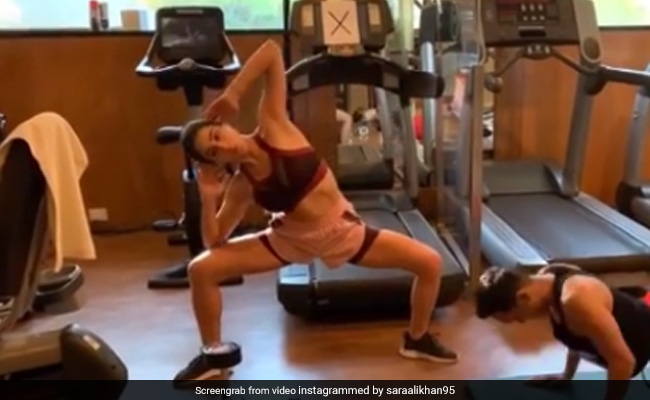 Sara Ali Khan, who is currently busy with the promotional duties of her upcoming film Coolie No 1, shared a video on her Instagram profile, in which she can be seen diligently working out at a gym. In the video, Sara can be seen doing push-ups, crunches, burpees, stretching, planks and what not. The actress can be seen doing all the exercises with utmost ease. Sara added a captioned to her post that read, "When in doubt, you must work out. Push-ups and crunches, don't lose count. With health and fitness you must be devout because that's what life is really about."

The Simmba actress opened up about her weight loss and transformation journey during Karan Johar's talk show Koffee With Karan. During the show, Karan Johar played two clips featuring Sara Ali Khan from when she was studying in Columbia University. She weighed 96 kilos then. Speaking of which, Sara said: "I had PCOD. I still do and because of that I think I put on the amount of weight that I did." The actress frequently shares posts from her workout sessions on social media.

Sara Ali Khan's next project is Coolie No 1, co-starring Varun Dhawan, which was expected to open in theatres in May 2020. However, due to the ongoing coronavirus pandemic, it got postponed. The film will now release on OTT platform Amazon Prime. It is a remake of the 1995 film of the same name that featured Govinda and Karisma Kapoor.