On 37 Years Of Saaransh, Anupam Kher Re-Enacts An Emotional Scene From His Debut Film 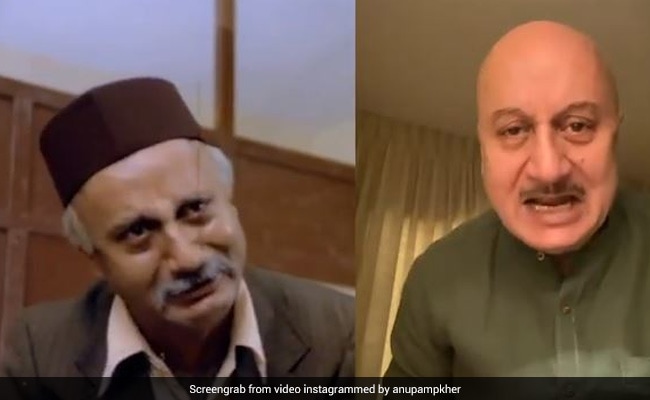 Anupam Kher, who made his debut in Mahesh Bhatt's 1984 film Saaransh, is celebrating 37 years of its release today. In Saaransh, Anupam played the lead role of BV Pradhan, a 65-year-old man at the age of 28. As a gift for his fans, Anupam has re-enacted an emotional scene from the 1984 film after many years. His latest Instagram post is all about that. He combined the original clip of the scene from the movie with his new video that he shot at home and posted them on his Instagram handle. Anupam Kher chose the scene in which his character BV Pradhan struggles to get the ashes of his dead son in a customs office.

In the video, Anupam Kher as BV Pradhan can be heard saying, "TV lene nahin aaya hoon, main apne mare hue bete ki asthiyaan lene aaya hoon...(I haven't come here for the TV, I have come here to pick up the ashes of my dead son.)". The actor then performed this scene again with the same level of honesty in his eyes. While the original clip is a treat to watch, we are also impressed with his new performance.

Anupam Kher also wrote a heartwarming note in his caption. In his caption, he asked his Instafam to choose one performance which they liked more. "As the day of my 37th year in Cinema comes to an end, here are my two performances of the same scene from #Saaransh. One from the actual film released on 25th May, 1984 & the other from 2021 at home. Which one you think is better? Also thank you for your love all these years. Jai Ho!#37yearsofSaaransh #ActorsJourney #Life #Actor #MaheshBhatt," his post read.

Earlier, Anupam Kher shared another video on his Instagram handle in which he remembered his journey in Bollywood that began with Saaransh. In the video, the actor can be heard saying, "Aaj meri film Saaransh ko release hue 37 saal hogye. In 37 saalon mein maine kareeb 518 ke kareeb filmein karli hain. Jab bhi log mujhe milte hain to kehte hain ki humne bada achcha kaam dekha hai, aapne itni filmein ki hain lekin wo Saaransh wali baat nahin hain. Shaayad unki baat sahi thi, wo meri pehli film thi. mai 28 saal ka tha...(Today, my film Saaransh has completed 37 years of its release. In 37 years, I have worked in nearly 518 films. Whenever I meet people, they say you have worked in so many films, but there is nothing like Saaransh. Maybe, they are right. That was my first film. I was 28 years old.)"

Anupam Kher also wrote a lengthy note in his caption. He wrote, "My 37th birthday in cinema. When I started making this video I had no idea where will it go. I just started talking! And see what happened? My first film #Saaransh completes 37 years today. It was the best debut an actor could dream of. I was 28 playing a 65 year old teacher named #BVPradhan. Certain scenes are still part of my soul. I had no idea what will my fate after this film!! I just wanted to give my everything to it. If I am still around it is because #Saaransh was my first film."

The actor then thanked Saaransh director Mahesh Bhatt, who gave a big break to him in the 1984 film. He also thanked Rajshri Films and the audience in his post. The actor used a hashtag #Happy37thBirthdayToActorAnupam along with many others. "Thank you #BhattSaab for your faith and courage. Thank you Rajshri Films for your belief. And most of all thank you my dearest audiences for your trust. Love and prayers always! #Happy37thBirthdayToActorAnupam #GodIsKind #BestDebutFilm #Gratitude #Humbling," his post read.

In Saaransh, Anupam Kher was paired opposite Rohini Hattangadi. Rohini played the role of his wife in the movie. The story was about an elderly couple who comes to terms with the loss of their son. The plot of the film was set in Mumbai. It also featured Soni Razdan, Madan Jain, Nilu Phule and Suhas Bhalekar.

Anupam Kher was honoured with the Best Actor trophy for his performance in Saaransh at the Filmfare Awards.

Dolphin Spotting, Cycling And Swimming: Gul Panag's Maldives Itinerary Is Too Good To Be True