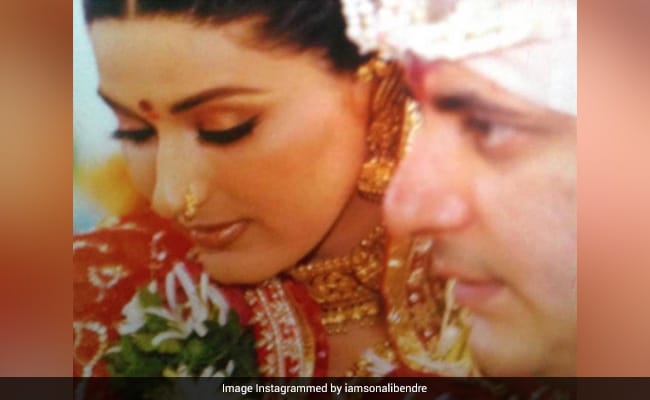 It's a happy Saturday for actress Sonali Bendre and filmmaker Goldie Behl. They are celebrating their 20th wedding anniversary. Sonali and Goldie are one of the cutest couples in Bollywood. To wish her husband on their special day, the actress picked two priceless throwbacks from her family album and shared them with a recent video of themselves. She kept her note short and sweet. “Then. Now. Forever,” wrote Sonali Bendre with an infinity icon and the hashtag “20 years.” We loved Sonali Bendre and Goldie Behl in old gems. The first one is from their wedding on November 12, 2002. The couple received heartwarming wishes from their celebrity friends in the comments section. “Congratulations! Many, many more years of love and happiness!” wrote Raveena Tandon while Dia Mirza commented, “Happy Anniversary.”

Here's how Sonali Bendre wished Goldie Behl on their anniversary:

Sonali Bendre shared the first throwback photo from her wedding earlier too. When the actress was undergoing cancer treatment in New York in 2018, she made sure to thank her “husband, companion, best friend, her rock” for staying by her side. She added two photos from the time she was being treated for cancer to her anniversary post and wrote, “As soon I began to write this... I knew instantly that I wouldn't be able to put down in words all the emotions and thoughts that were running through my head.”

Another emotional excerpt from Sonali Bendre's post read, “Marriage is standing by each other, through thick and thin, in sickness and in health… and god knows, how we've been through that this year. What not many people realize is that cancer is not just an individual battle… it's something that a family collectively goes through. I was also able to go on this journey, knowing that you'd juggle all your responsibilities, and take on some more and hold fort back home… all this while shuttling between two continents. Thank you for being my source of strength, love and joy, for being with me every single step of the way.”

Sonali Bendre and Goldie Behl are parents to a son, named Ranveer. The actress is best known for her performances in films such as Sarfarosh, Hum Saath-Saath Hain, Major Saab and Diljale.