Om: The Battle Within First Look: "A battle within to keep the fighting spirit alive," Aditya Roy Kapur described the film's theme 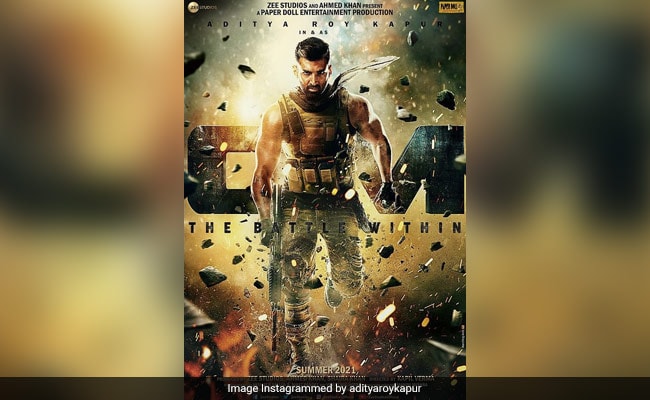 Aditya Roy Kapur dropped his first look from the upcoming action film Om: The Battle Within on Friday. "A battle within to keep the fighting spirit alive," Aditya Roy Kapur described the film's theme, which explains his intense first look poster. Aditya, who has been cast in the titular role, can be seen sporting a rugged look - such is the intensity of the poster that he appears to be charging out of it, carrying almost an entire armory of weapons. Some might even say that Aditya Roy Kapur's Om: The Battle Within first look resembles that of Hrithik Roshan from War.

Aditya Roy Kapur co-stars with actress Sanjana Sanghi in Om: The Battle Within. The shooting schedule of the film took off on Thursday, when both Aditya and Sanjana shared updates on Instagram. "Our beautiful journey begins! Day 1 with the best, Aditya. Most stoked for my next action-thriller," wrote Sanjana. On Aditya's post, his Malang co-star Anil Kapoor dropped in to give him a shout-out: "Congratulations my friend ... action... action... action for you," he wrote.

OM: The Battle Within is being directed by Kapil Verma and co-produced by Zee Studios, Ahmed Khan and Shaira Khan. Aditya Roy Kapur dropped a hint about the release date and said: "Arriving this summer 2021."