Richa Chadha carefully picked out her favourite photo from the archives and described it as "first folio." 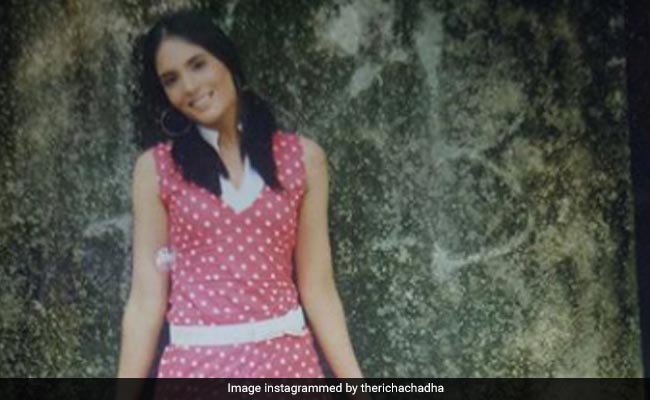 Actress Richa Chadha, who began her career as a model before stepping into Bollywood, shared a glimpse of her first portfolio as a model on Instagram. Richa carefully picked out her favourite photo from the archives and described it as "first folio." Seeing a much younger version of herself posing for the camera, the Richa Chadha of now had this reaction: "LOLOLOL." In one of the hashtags, Richa added: "Humble beginnings." In the throwback memory, Richa can be seen posing in a pink polka dotted dress against a wall. For accessories, she had a Marilyn Monroe-themed printed bag, placed on the floor and styled her look with strappy heels. Here's a trip down memory lane with Richa Chadha:

Richa made her Bollywood debut with a small but significant role in 2008 movie Oye Lucky! Lucky Oye!. The Gangs of Wasseypur films released in 2012 turned out to be her breakthrough movies - she received several film award nominations. Richa's onscreen character Bholi Punjaban from Fukrey is also a well remembered one. Before the lockdown, she was filming a Fukrey spin-off movie titled Bholi Punjaban, centred on her character. Richa is engaged to actor Ali Fazal, with whom she co-starred in the Fukrey series of films. Richa Chadha is also well known for her roles in Love Sonia, Masaan and Sarbjit. Richa Chadha has also attended the Cannes Film Festival in the past few years, representing Gangs Of Wasseypur and Masaan. In 2017, she accompanied Ali Fazal to the screening of Victoria And Abdul in Cannes.

Richa Chadha and Ali Fazal had planned for an April wedding this year but because of the coronavirus pandemic, they postponed it to the second half of 2020. Here's what their spokesperson told news agency PTI: "Given the current scenario and the unfortunate turn of events owing to the COVID-19 pandemic globally, Ali Fazal and Richa Chadha have decided to postpone their wedding functions to the latter half of 2020 tentatively. They wish for everyone to be healthy and safe and at no cost would want their friends, families and well-wishers to be affected."