In the pictures, the actress looks gorgeous in a printed red bikini 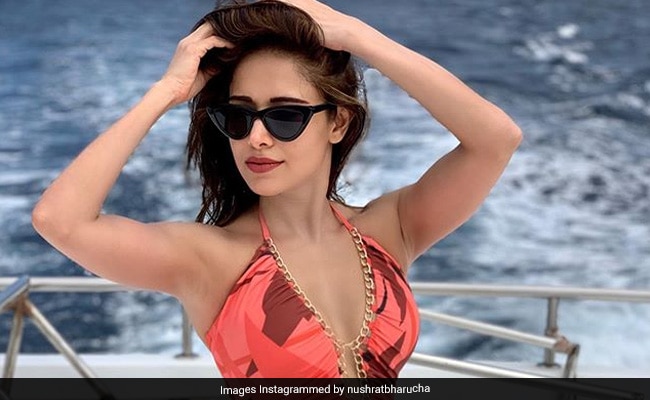 Nushrat Bharucha sure knows how to raise the temperature on Instagram. The reason we brought this up today because the actress has, once again, sent the Internet into a tizzy with her stunning Maldives vacation pictures. On Friday, Nushrat, who is currently having the time of her life in Maldives, shared a couple of photos of herself and it will make you green with envy. In the pictures, the actress looks gorgeous in a printed red bikini, which she paired with a peach-coloured sarong. In one of the pictures, she can be seen posing in what appears to be a boat while in another, she can be seen posing in front of her resort.

A day earlier, the actress shared multiple photos on the first day on her vacation. In the pictures, she could be seen wearing a magenta bikini and having a lavish floating breakfast in a pool. It wouldn't be wrong to say that the beautiful view in the backdrop made the pictures absolutely perfect. In case you haven't checked it yet, take a look:

On the work front, Nushrat Bharucha made her debut in Bollywood with the 2009 film Kal Kissne Dekha. However, her breakthrough film was Pyaar Ka Punchnama 2 (2015). She went on to feature in films such as Sonu Ke Titu Ki Sweety and Dream Girl. Nushrat will next be seen in Hansal Mehta's Chhalaang, in which she will share screen space with Rajkummar Rao. The film will open in theatres on January 31 next year.