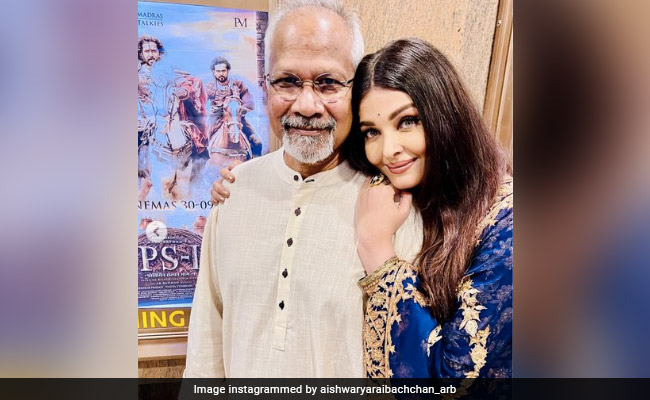 Mani Ratnam's much-awaited magnum opus Ponniyin Selvan: I was released on September 30. The film is based on the novel of the same name by Kalki Krishnamurthy. Vikram, Aishwarya Rai Bachchan, Trisha Krishnan, Sobhita Dhulipala Jayam Ravi, and Karthi are part of the project. Now, a day after the release,  Aishwarya Rai Bachchan has shared a set of heartwarming pictures on Instagram. Of course, it features the ace filmmaker Mani Ratnam. Here, the two are happily posing for the lens. Aishwarya Rai Bachchan didn't think much about the caption and simply dropped a star, red heart and evil eye emojis. The actress looks stunning in the royal blue ethnic ensemble. Aishwarya Rai Bachchan and Mani Ratnam have previously collaborated for Iruvar,  Guru and Raavan. Fans have praised the “greatest director-actor pair” in the comments section. A person wrote, “I saw PS-1 yesterday… mind-blowing. Amazing plot, acting and direction”. Another said, “Ponniyin Selvan is a blockbuster hit. And, you are getting only good reviews for your performance.”

Trisha Krishnan, on Ponniyin Selvan: I release day, treated us to some behind-the-scenes pictures from the sets. She also shared a picture with Mani Ratnam and wrote, “Kundavai and her maker. Thank you, Mani sir for it all. See you in the theatres. 30.9.2022.” Trisha Krishnan plays the role of the princess of the Chola Dynasty.

Earlier, Trisha Krishan, during an interaction with NDTV, opened up about sharing the screenspace with Aishwarya Rai Bachchan. She said, "Ash Mam, I, fortunately, got to meet her and interact with her on day one of my shoots. She is beautiful inside and out, I don't even need to say that. The thing is, this was challenging because we are not supposed to like each other too much in this film, but we got along pretty famously on set. She added, "There were times when Mani sir would come and say, 'listen, you guys are taking too much, stop talking, I can't have this camaraderie for my scene.'"