Ponniyin Selvan: I will release on September 30 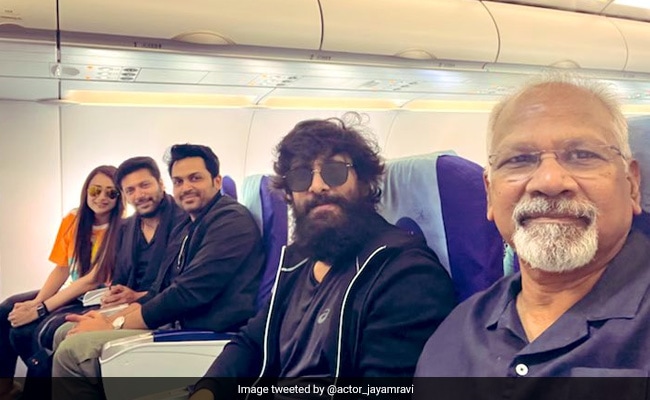 The release date ofPonniyin Selvan: Iis nearing and the actors are busy promoting their film with director Mani Ratnam. Now, as they begin the "journey of the Cholas," Jayam Ravi has shared blockbuster pictures featuring director Mani Ratnam and his co-stars Chiyaan Vikram, Karthi and Trisha Krishnan on a flight. In the images, they all are happily posing for the camera. Chiyaan Vikram, Karthi and Jayam Ravi look dashing in similar outfits, while Trisha looks beautiful in a yellow top paired with black pants. Sharing the post, he wrote, "The journey of The Cholas begins #PonniyinSelvan1 #PS1".

Recently, speaking to NDTV, Trisha opened up about working with Aishwarya Rai Bachchan. She said, "Ash Mam, I, fortunately, got to meet her and interact with her on day one of my shoot. She is beautiful inside and out, I don't even need to say that. The thing is, this was challenging because we are not supposed to like each other too much in this film, but we got along pretty famously on set. She added, "There were times when Mani sir would come and say, 'listen, you guys are taking too much, stop talking, I can't have this camaraderie for my scene.'"

Ponniyin Selvan: I is based on Kalki Krishnamurthy's 1995 historical novel of the same name, chronicling the rise of the Chola dynasty. The first part of the film is slated to hit the theatres on September 30.

Dulquer Salmaan On Dealing With Trolls: "There Are Days When It's Hurtful"