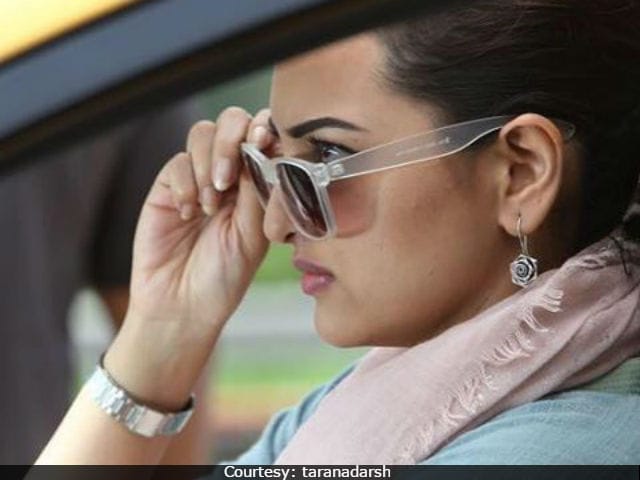 New Delhi: Sonakshi Sinha's latest film Noor, which released last Friday, continued to have a 'dull' day at the box office. The collections dropped by 50% on Monday (Day 3), reports Box Office India. The film which collected Rs 2.09 crore on Sunday, earned Rs 60 lakh on Monday, suggests Box Office India's report. Noor's box office collection now stands at Rs 5.20 crore. In the film, Sonakshi plays a journalist, who tries hard to juggle between her personal and professional life. Until one day, Noor's (Sonakshi) life changes after she gets a big investigative story. Box Office India predicts that the film will manage to score approximately over Rs 6.75 crore over in this week.

Noor is adaptation of Pakistani novelist Saba Imtiaz's Karachi, You're Killing Me!. Kannan Gill, Purab Kohli and Shibani Dandekar co-star with Sonakshi in the film.

In his review for NDTV Movies, Saibal Chatterjee gave the film two out of three stars. "Sonakshi Sinha is lively in a film as appetizing as flat beer. Noor shows the mundane but essential pursuits of an ambitious but confused middle-class girl," he wrote.

Of her role in the film, she earlier told NDTV, "I could relate to the character immediately. When I was offered the script, I knew in the first two pages that I am doing this film. I am part of this film and I am Noor definitely."

Promoted
Listen to the latest songs, only on JioSaavn.com
Before Noor, Sonakshi featured in A R Murugadoss' action drama Akira. She is currently filming Karan Johar's Ittefaq, opposite Sidharth Malhotra.

Neena Gupta Reveals An Ex Cancelled Their Wedding At "The Last Minute": "Till Today I Don't Know Why"