'None Of Them Have Told Me:' Kareena Kapoor On Kartik Aaryan And Sara Ali Khan's Dating Rumours 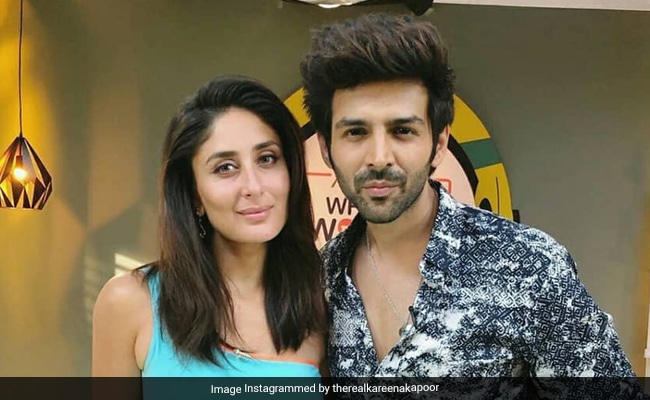 Kareena Kapoor, in a recent interview was asked if she knows who Kartik Aaryan is dating and that if she has heard of Kartik and Sara Ali Khan's dating rumours. The 39-year-old actress neatly doged the question and told Pinkvilla, "In fact that was one of my questions on my show and he was like he is dating his work." Kareena, who is married to Sara's father Saif Ali Khan, was also asked if Sara and Kartik are dating, to which she replied by saying, "I honestly wouldn't know as none of them have told me that and that's the truth."

Sara Ali Khan and Kartik Aaryan are co-stars in Imtiaz Ali's untitled film, which is said to be the remake of the 2009 film Love Aaj Kal, which starred Sara's father Saif Ali Khan and Deepika Padukone. The film is scheduled to hit screens on February 14 this year. Kartik and Sara announced their association with the untitled Imtiaz Ali project by sharing special posts on their Instagram profiles. Kartik shared a picture and he wrote: "Honored to embark on a journey with Imtiaz Ali's next, the yet untitled film with Sara Ali Khan and Randeep Hooda," Kartik added,"Aur ji haan, issi film ki shooting chalu hai."

Sara Ali Khan and Kartik Aaryan have been featuring on the trends list ever since, the Simmba actress confessed on Karan Johar's talk show Koffee With Karan 6 that she would like to go on a date with the Luka Chuppi and he responded saying that he wouldn't mind going out on a coffee date with Sara.

Coming back to Kareena Kapoor - the actress was last seen in Good Newwz, co-starring Akshay Kumar, Diljit Dosanjh and Kiara Advani. The actress has several films in the pipeline, which include Hindi Medium, Takht and Lal Singh Chaddha.