"When a mother carries her child within her and gives him or her life, only she and the father are allowed to decide who, how and what the child will grow as," she wrote 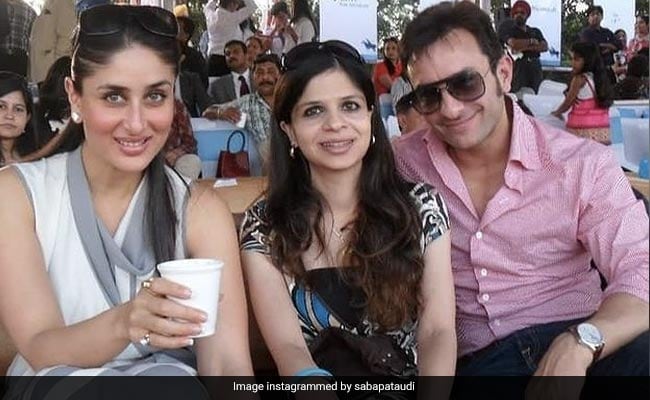 Saif Ali Khan's sister Saba has waded into, somewhat belatedly, the noise surrounding Kareena Kapoor and Saif's choice of baby names. "No one else, including other family members...have a say," jewellery designer Saba wrote in an Instagram post, "Parents are the only one with rights." Kareena and Saif welcomed their second son Jeh in February; his name - Jeh is reportedly short of Jehangir - triggered a predictable uproar on social media just as their older son Taimur's had. Jehangir was the name of a Mughal emperor, Taimur is associated with a Central Asian invader - not that either of Kareena and Saif's children are named after the emperor or the invader. But, social media.

In her post on naming rights, Saba Ali Khan wrote, "When a mother carries her child within her and gives him or her life, only she and the father are allowed to decide who, how and what the child will grow as. And the name. No one, NO ONE else, including other family members, who may gladly suggest, have a say. On anything! It's her soul that has nurtured that baby. Parents are the only one with rights. Think it's a reminder for everyone to respect that. Today, tomorrow, forever!"

Saba accompanied her post with a picture of Kareena and Jeh in the Maldives and signed off with: "Love you Bhabs and Baby Jeh. Kiss from buajaan too!"

Kareena Kapoor officially revealed Jeh's name at the launch event for her book Kareena Kapoor's Pregnancy Bible last month. Asked by Karan Johar on an Instagram live chat, "Are we allowed to mention his name out in the public debate now? Can we say that you call him what you call him," Kareena Kapoor said, "Yeah, it's Jeh Ali Khan." Bollywood Hungama reported that the Jeh was actually short for Jehangir, as revealed in the captions of the pictures in the book.

Speaking to India Today later about the trolling over baby names, Kareena Kapoor said, "You know I am a very, very positive person. I am very happy and content. I want to spread happiness and positivity in a time like Covid, I can't think of trolls or I can't think of any form of negativity. There is no place for negativity in our lives... If there is positivity, there is negativity, I have to look at it like that. I wish there wasn't. Because we have two innocent children we are talking about. But we are going to stay happy and positive."